1 Hot Wheels Exclusive RLC Chevy 454 SS Coming Right Up, You Can Get Two

4 2022 Hot Wheels Legends Tour Is in Full Swing, Big Winner Yet to Be Chosen

5 2022 Hot Wheels Boulevard Series Looks Like the Perfect Mix of Old and New Sports Cars
Car video reviews:
Up Next

Yesterday the Hot Wheels Red Line Club members had the chance of buying the newest Chevy 454 SS, but we'll get back to this topic later on. Meanwhile, Mattel has come up with some more Car Culture goodness, in the form of Hot Wheels Team Transport Mix 3. Once again, collectors and fans alike have got three more interesting items that they can purchase. Choosing a favorite from this Mix feels quite impossible.

Seeing that we are at Mix 3 for 2022, that means there's one more set left before Hot Wheels switches to the 2023 line-up. It has been a pretty good year so far, with a decent mix of European, Japanese and American cars.

While we might have to wait a while for this new Mix to become available in stores, it's still nice that we get to see an unboxing of it beforehand. The LB-ER34 Super Silhouette Nissan Skyline is a brand new casting for 2022, and it was just recently introduced as part of the Mountain Drifters set.

It came in two colors: the all-black Chase version and the standard red and black one. Both had LBWK decals on the side of the car, and the rarer Chase model was an instant hit with Hot Wheels collectors. The Team Transport set R34 Skyline is arguably a lot nicer.

The LBWK logos were moved to the back of the car, and it now features a mostly red Motul/Advan livery. The previous 5-spoke RR5SPM wheels have been replaced by a set of 10-spoke RR10SPM ones, and it does wonders for this vehicle.

Accompanying the Skyline is the Fleet Street truck, which comes with a matching red Motul livery. This is a brand new casting for Hot Wheels! Although it is a depiction of an unlicensed European hauler, it looks perfect for the job at hand.

You can't help but appreciate some details as the tires it's transporting or its Volk Racing TE37-inspired Real Riders wheels! For the next 1/64 scale racing team combo included in the set, we're looking at a nicely executed red and yellow Shell livery.

Hot Wheels Porsches are always popular with collectors, and even more so when we're talking about the legendary 962. We've recently encountered a diecast collector that has a mind-blowing line-up of 962s, but more on that in another story. Hot Wheels first introduced the 962 casting in 2017, as part of the Race Day series.

The Shell livery is the seventh one so far and it features white Real Rider Aero turbo fan wheels! For those of you who are deeply in love with the 962, you've probably already figured out that this is a replica of the car that Hans Joachim Stuck used to drive back in the day.

The designated hauler for the Porsche is the Sakura Sprinter, a Team Transport exclusive truck that has been around since 2018. This has traditionally been used to carry Japanese cars around such as the Nissan Laurel 2000 SGX, the Nissan Skyline HT 2000GT-X, the Nissan Fairlady Z, the Mazda 787B, and the Nissan Skyline GT-R R32.

But earlier this year, Hot Wheels used the Sakura Sprinter as a hauler for the Lancia Stratos Group 5. So this might not be the last time that we'll see this kind of Japanese-European mismatch.

The 1972 Plymouth Cuda is up next, and you get instant NHRA vibes just by looking at the card graphics. Although this casting dates back to 2009, it hasn't been used that often. This is its eighth appearance in a Hot Wheels set, and the second time it is featured in the Team Transport series.

It had a similar livery in 2018, but the main color has changed from yellow to white. If you couldn't tell that this is a Funny Car at first glance, that will change as soon as you'll notice that the whole body goes up just like it would on a pro-level drag car.

The Retro Rig hauler fits in quite nicely, especially when you think of the fact that it's based on the actual hauler used by Don Prudhomme to transport his famous 'Cuda Snake. So far, the Retro Rig has only been used to transport American Muscle cars, and we get a feeling that isn't going to change anytime soon. If you're eager to get your hands on this set, you can find it available for preorder on eBay. You should expect to pay around $70 for it, but delivery times are not yet clear. 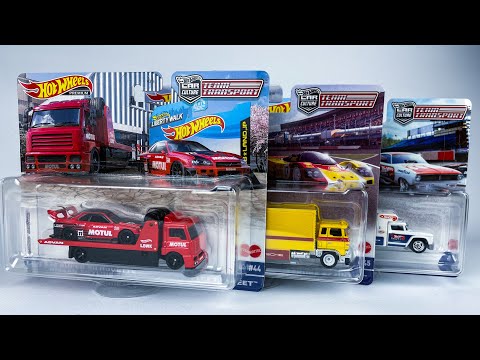