3 Man Installs Engine in RX-7 in Two Hours, Gets It Running, Lives to Tell the Tale

The year was circa 2011. At that point, the fastest car I had ever seen with my own eyes was a turbocharged Honda Civic that could do high 8-second passes down the quarter-mile. One day I stumbled upon a video of what seemed to be a Mazda 6. It was built by PAC Performance, had a rotary engine inside, and was fast enough to secure a 6.63-second run at the strip. Fast forward to this day, this Australian company is still on top of the rotary game.
9 photos

Setting records at the drag strip is just the usual business for these folks, and one look at their roster of clients will have you reading about rotary cars for hours. Most of the top-level cars they've built seem to be older RX-2 and RX-3 models, although several RX-7s are featured on that list as well.

Today we won't be looking at their race-only vehicles, instead, we'll be drooling over their street-legal RX-3 project. Peter Rehayem is the driver of the PAC13B, a 2,900-lbs (1,315 kg) monster that still retains a full street trim and runs on E85 fuel.

As you can tell by the name, it's running a PAC Performance 13B engine with a Motec M150 ECU management. Peter's goal from the beginning was to have a street-legal car than can do 7-second runs and he has been striving to get here for a while now.

Last year, when his fastest run was 8.54 seconds, the 13B Bridgeport engine was capable of delivering up to 1,200-hp. At that level, you can't afford to lose time with a manual gearbox, so a paddle-shifted three-speed automatic was brought in instead.

The car does feature a nitrous system as well, just to ensure that when the lights turn green everything is good to go. In the old setup, Peter was using a Garrett GTX45 turbocharger, but we can't help but wonder if that has been upgraded as well.

In December of 2021, the PAC13B managed to go as fast as 8.19-seconds with a trap speed of 167 mph (268 kph). The team continued to fine-tune the car, hoping that the lower winter temperatures would also improve the outcome.

Following an event that took place at Sydney Dragway, Peter finally got what he was aiming for: a sub-8 second pass! Granted, the RX-3 completed the standing quarter-mile (402 meters) in 7.99 seconds with a trap speed of 177 mph (284 kph), but that still counts as a sub-8 second result.

Reportedly, this should be the world's first 13B-powered street car to go that fast. What's equally as shocking is that right after the race, Peter left the track behind the wheel of the PAC13B RX-3. Although he took the parachute off the car, you can't help but wonder how the Australian police would react upon seeing this car cruising along the highway.

We get the feeling that the guys over at PAC Performance aren't planning to stop the development of this car just yet, and all that we can hope for is to see it going up against a Pro Street American Muscle car soon. Wouldn't that be fun? 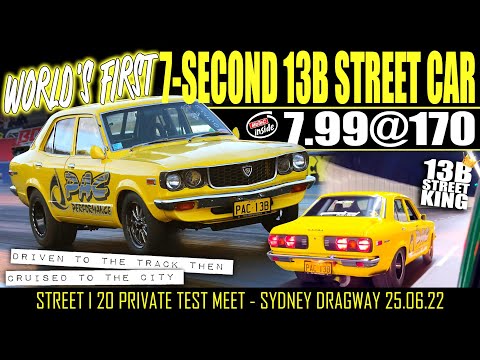