The 2016 Mazda 3 is one of the most important contenders in the compact hatchback market.

It has a lot of things to offer and a few things to ask. Its name in the JDM market and China is Axela, but basically, it is the same car. It has a nice, fluid, look, called Kodo design in the Mazda's family. Now, the Mazda 3 has separated itself from the Ford's C platforms and came with its platform that features a McPherson strut up front and a semi-independent system in the rear. But even if they tried their best to make that rear suspension behave good, it is still not an independent suspension.

Inside the cabin, there is room for five adult people and the whole atmosphere is kind of relaxing. The infotainment unit is planted on the dashboard like it was installed after the car left the assembly line. It is not that big or small and has decent controls via a rotating knob.

Under the hood, Mazda installed a range of four gasoline engines and two turbodiesels. Depending on the market and engine displacement, the 3 can be equipped with a 6-speed manual, a 4-speed automatic or a 6-speed automatic. The latter is offered as standard on the 2.5-liter engine. And that is the version to aim. Or, if you live in Europe, the 1.5-liter turbodiesel is a very decent version. Just don't forget that underneath the car is not an all-wheel independent suspension. 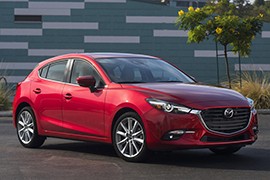