Mazda opened a new chapter in its automotive technology achievements when it introduced the CX-60 on the market in 2022 as its first PHEV ever.

With the SUV-mania spreading around the world and the addition of the electric-car frenzy, Mazda made a wise choice by creating an electrified SUV. While it wasn't completely electric, it was much more attractive for those who were too affected by the anxiety range.

Obviously, the car's look clearly followed the same design language as its sibling, the CX-5. Its sharp-looking headlights and the big drop for the massive grille into the apron were part of the carmaker's brand image. A pair of chromed trims adorned the front fenders and showed the PHEV lettering. At the back, below the bumper, Mazda installed a quad exhaust system with rectangular tips.

For the interior, Mazda adopted an evolved Kodo design trend. The massive, longitudinal center console emphasized the longitudinally mounted engine at the front. It was wide enough for both occupants and allowed for a driver-side mounted gear selector, while the passenger had access to a small compartment with a lid. Atop the center console that hosted the climate control unit, Mazda placed a 12.3" display for the HMI (Human Interface Machine) infotainment system.

Under the hood, Mazda offered a choice of three engines. The PHEV version featured a 2.5-liter inline-four aided by a 100 kW electric motor for a total of 322 hp (327 PS) and 369 lb-ft (500 Nm) of torque. It was mated to an eight-speed automatic transmission that sent the power in all corners. Apart from this range-topper version, the carmaker also provided a 3.0-liter inline-six and a 3.3-liter oil-burner, which were available with either an AWD or an RWD system. 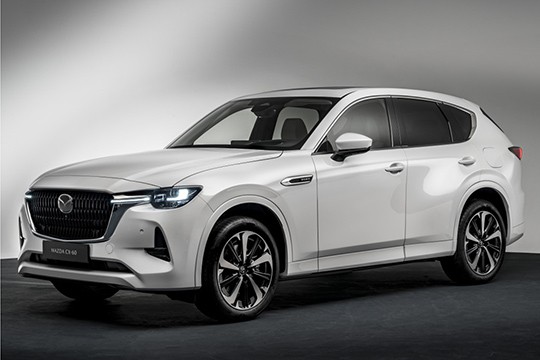