In case you did not know, the feisty world of exotic, fully-modified quarter-mile dragstrip action splits time between the short few seconds of racing glory and countless hours of hard work to improve the ride or remedy the inevitable defects.
13 photos

And here is a case in point. Herman Young, the owner of the well-known (at least among Mopar aficionados) Demonology channel on YouTube and also the driver of a feisty Whipple-tuned, nitrous-fed ‘Soul Snatcher’ Dodge Challenger SRT Demon is taking a forced mechanical break from quarter-mile brawls.

With the Demon currently in the shop, this Youtuber cannot stand far away from the dragstrip for too long, so he “decided to go out and check out the imports at the Texas Motorplex.” Of course, that did not happen before we got a little update on the progress registered in the shop, from the two-minute mark.

Then, from the 4:07 mark, it is time for the promised action (the race was uploaded on June 24th) from “where speed was born,” aka the quarter-mile drag racing facility located in Ennis, Texas, some 40 miles (64 km) south of downtown Dallas. There, Young met a couple of interesting rides: Luna and Jotech Motorsports' Hello Kitty 1,500-hp Nissan GT-R that was recently crowned queen of its division at TX2K22, plus a feisty-green Audi R8 that is said to be equal in terms of horsepower with the warrior kitty.

By the way, the second video embedded below also shows what happened when Luna's R35 tried to “exorcise” Young’s Dodge Demon ‘Soul Snatcher.’ Now, back to the current import brawl, the low eight-second dragstrip action kicks off at the 7:55 mark after we meet both drivers. Well, as it turns out, these 3,000-hp tuned cars were almost on par and it was ultimately up to the check light to determine the winner… 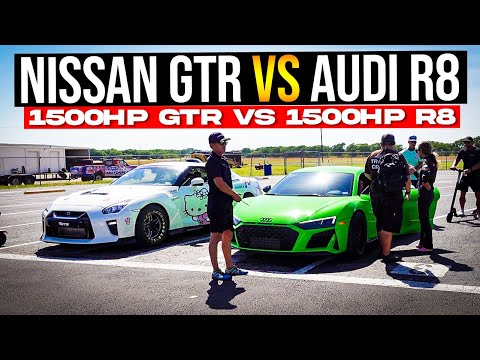 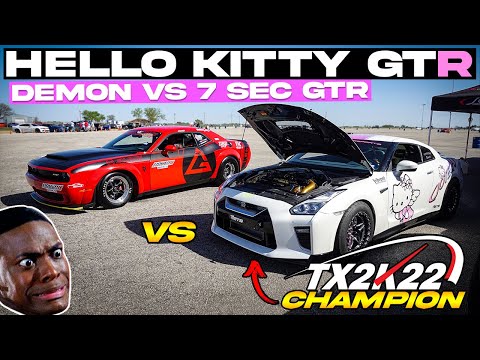