2 Man Installs Engine in RX-7 in Two Hours, Gets It Running, Lives to Tell the Tale

World's Smallest Rotary Engine Revs Up to 30,000 RPM, Could Be Fun in an RC Car

Do you remember Gulliver's first voyage to the island of Lilliput? The indigenous people there were less than 6 inches (15 cm) tall. That's almost twice the length of a Hot Wheels diecast vehicle. Just imagine if the Lilliputians would have had the technology to build cars. Would they have used electric motors or engines with internal combustion? And if ICE is the right answer, would it have been a piston, or a rotary one?
11 photos

This brings us to our point. Enginediy is a company that has been around since 2009. A quick search will reveal that they are specialized in all types of engine models, ranging from old Sterlings to the more complex V8 units. Yes, that's right, you can buy a miniature V8 from them.

Not only do you get to perform the assembly yourself, but it is also fully functional. With over 500 pieces included in the package, it will take you at least four hours for the build. And you should expect the finished product to weigh about 5.5 lbs (2.5 kg).

With this being a rotary engine, it was to be expected that firing it up would take several attempts. But when it does start, it sounds ridiculous. Thanks to its size, it can rev up to 30,000 rpm, which is more than you'll get in a Formula 1 car.

The manufacturer suggests this would be great in an RC car or airplane, and it would be a shame to just keep it around the house to impress your friends with it. This cute single-rotor engine will set you back $500, and there's even a twin-rotor setup available if you want to go a step further. 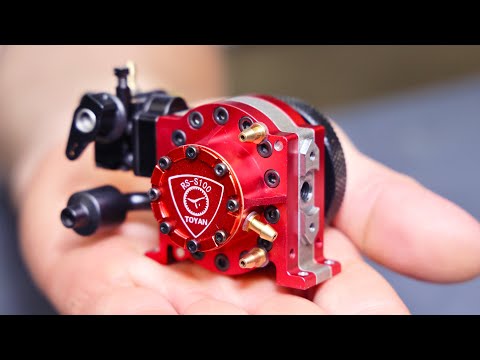