The concept of a fast car has changed quite a bit over the past 100 years. You don't need to own a supercar to achieve ludicrous speeds these days. Of course, going fast in the real world is not the same as it would be on the race track. So it may seem that your SUV is insanely fast on roads that are covered with potholes, but you'll be outclassed in an instance when trying to go up against a sportscar on a circuit.
13 photos

Today's drag race is pitching three different styles of vehicles against each other at the drag strip. On one hand, there's the BMW X5 M which is one of the fastest SUVs money can buy these days. Then, there's the exotic Lamborghini Huracan Performante which looks like it's going fast even when it's stationary.

And last but not least, there's the rather inconspicuous-looking Audi RS 6 Avant. If this challenge would've taken place around the Nürburgring Nordschleife, the Lamborghini would have been your safest bet.

But going fast in a straight line is a little less complex than that. Out of the three cars, the Huracan Performante is the only one with no aftermarket upgrades. For this challenge, it will have to rely on its naturally aspirated V10 engine that puts out 631-hp and 442 lb-ft (600 Nm) of torque.

You don't need to be an automotive engineer to figure out that it's the lightest car here, as it weighs in at 3,046 lbs (1,382 kg). As is the case for the BMW and the Audi, this too has the benefit of AWD and a modern automatic gearbox.

The BMW X5 M is no longer using the same setup as it did when it left the factory. Performance figures are now up to 740-hp and 695 lb-ft (943 Nm) of torque, which just goes to show how easy it is to improve these modern twin-turbo V8 engines.

But you should keep in mind that this is an SUV after all: cutting through the air in this is not as forgiving as it is in the Lamborghini, and it also weighs in at a whopping 5,015 lbs (2,275 kg)! The Audi RS 6 is not a lightweight contender either, but it's still some 440 lbs (200 kg) lighter than the BMW.

On the plus side, it's now rated for about 830-hp and 826 lb-ft (1,120 Nm) of torque. With the stock turbos still in place, you can't help but wonder how much further you can push this car before putting the engine at risk.

At this point, based on the math, you can already tell which one of these cars is likely to win the challenge. But let's not jump ahead of ourselves and just watch how things develop from here. Launch after launch, the X5 M is off to a pretty good start.

But it's all just a short-lasting victory. Both the Lamborghini and the Audi are in a league of their own. The RS 6 doesn't sound as dramatic as the Huracan Performante, but that doesn't stop it from winning all of the three initial quarter-mile (402 meters) runs. It needed just 10.66 seconds to cross the finish line, with a trap speed of 134 mph (215 kph).

The Huracan Performante wasn't all that far behind, at 11.02 seconds and an exit speed of 134 mph as well. Meanwhile, the X5 M is stuck with a 12-second run, which means it would probably need at least 200 more horsepower to be competitive against these guys. The Performante's driver was hoping that the outcome would look differently for the rolling race, but the RS 6 goes on to score a flawless victory. 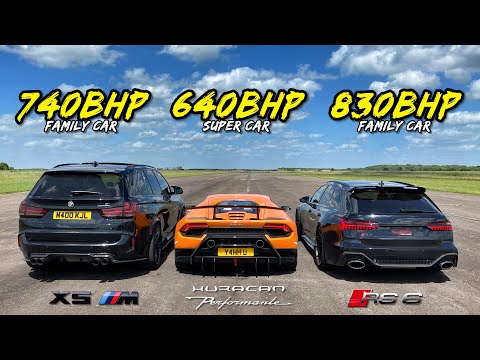