2 2022 Hot Wheels Legends Tour Is in Full Swing, Big Winner Yet to Be Chosen

4 Hot Wheels RLC Exclusive R34 GT-R Coming Up, You'll Be Lucky if You Can Get One

It has been almost three weeks since the 2022 Mainline case M has been released by Hot Wheels. And fans of the 1/64 scale diecast vehicles around the world were already anxious for the release of case N. That moment has finally arrived, and it is bittersweet in a way. At this point, we are just two cases away from the end of the 2022 series, but that also means we're closer to the new products to be released in 2023.

Now, if you've spent enough time in Hot Wheels groups on various platforms including Reddit and Facebook, you've probably seen some previews of the upcoming castings. But seeing someone open up a new case is always exciting nonetheless.

Why is that you ask? Usually, when the new cases hit the stores, scalpers are always there to collect the finest pieces. That way, they can sell them online for a quick profit. At that point, collectors are either forced to spend more on their favorite items or to wait for the next batch of cases.

Paying extra is never a fun thing to do, but waiting for additional cases can be a dangerous game to some extent. Sometimes, you can end up waiting for too long and missing out on that new casting you wanted so much. For instance, my biggest regret this year was missing out on the white, 1999 Honda Civic Type R EK9.

But enough of the Hot Wheels hunting strategies and perils, let's move on with the unboxing of Case N. Right off the bat, both the STH and TH cars are quite exciting. The Audi RS2 Avant has been a fan favorite ever since the casting was first released back in 2021.

This new iteration is finished in Spectraflame Black, following the first two versions that were colored in Nogaro Blue and Metalflake Silver. Some people are charging as much as $125 for the RS2 Avant on eBay, but you can find more affordable options for about $27.

Looking over at the Regular Treasure Hunt, we've got another fan favorite to gawk at: the 1998 Subaru Impreza 22B STI-Version. The previous versions looked slightly cleaner overall, with no liveries on them, and some people like them better that way.

But collectors are still going to fight over these items, seeing as the Impreza is just one of five non-fantasy Treasure Hunts to be released this year. The first car to come out of case N is the fictional Altered Ego, which hasn't been around since 2020. It's not terrible, but not great either.

As you'd expect, there are quite a few vehicles inside that have been featured before, and the Lotus Sport Elise is one of them. Thankfully, some of these items are now delivered with new color schemes. Of course, seeing a white Lucid Air instead of a gray one isn't going to make that big of a difference.

If there's one duplicate car that we're not disappointed to see again it's the 1962 Chevrolet Corvette Gasser. The "Mad Mouse" was just launched weeks ago in Case M, so collectors might struggle to get their hands on one anytime soon.

The 2015 Dodge Challenger SRT has been MIA for a few years now, so it's good to have it back in a mix of dark blue and black. But it is without a doubt that the most exciting casting seen in this case is the Pagani Zonda R!

This isn't the first time Hot Wheels is putting out a replica of the Italian supercar manufacturer, but then again the Zonda R is in a league of its own. We would argue that this might be the coolest casting to be released in the 2022 mainline series. At this point, we can only hope that a Real Riders version of it will also come out shortly.

Drift enthusiasts will be happy to see not one but two tail-happy wagons in this case. We've already seen the first one before: the Nissan Maxima drift car. And although we're not quite fond of the color scheme on the Volvo 240, it's still nice to have an additional scale replica flying under the Swedish flag.

As if this case wasn't already exciting enough, the Lotus Evija then pops up to increase the number of new exotics released in 2022. If you didn't get the 1984 Mustang SVO STH the last time around, you can now at least have the plain version of it. The BMW R nineT Racer looks decent enough for you to start dreaming about an entire Hot Wheels line-up of two-wheelers.

But it's not likely that Mattel will be pursuing that kind of approach, at least not in the immediate future. All in all, Case N might just become a fan favorite, and it's hard to think that Hot Wheels might still have some aces left up their sleeves for the last two cases of 2022. 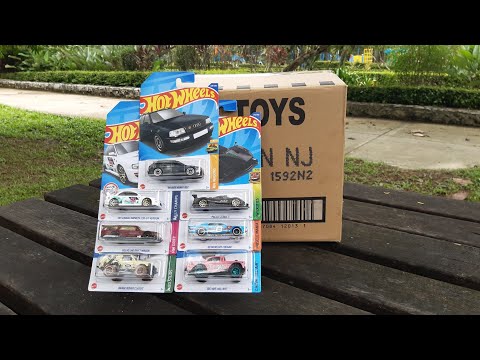