4 Forza Horizon 5 Series 9 Is All About Hot Wheels, Here Is What’s Coming

A few years ago, one of my ex-girlfriends came running home one day. She was extremely excited following a conversation she had at work, a conversation about drifting. She was at a point where she knew more about the sport than most average drift fans, as I was always telling her about the sport. Right now, I'm at a similar point in life. But this time, my current girlfriend knows more about Hot Wheels than most normal human beings.

2022 Hot Wheels Legends Tour Is in Full Swing, Big Winner Yet to Be Chosen

And one of the cool things I've recently told her about is the Hot Wheels Legends Tour. If you live in the United States of America, chances are that you might have seen one of these events with your own eyes. Otherwise, you might have noticed a few diecast models that popped up on the market in the past couple of years.

It all started in 2018, for the 50th anniversary of Hot Wheels. The diecast manufacturer went on a nationwide tour, spanning for 15 cities. The events were held in Walmart car parks, and people would drive over for a chance to make history.

Vehicles would be judged in three categories: Authenticity, Originality, and Garage Spirit. In other words, if your car looked like a Hot Wheels vehicle, you had a fighting chance. It was the SEMA Show back in 2018 where 15 people gathered to see who would be the winner of the Legends Tour.

Ford, Dodge, and Chevrolet vehicles dominated the tour, but neither brought home the grand prize. Instead, it was Luis Rodriguez from New Jersey that won the whole thing. He is the man behind the ludicrous 2 Jet Z, a sort of futuristic hot rod.

According to official reports, over 65,000 people attended the first-ever Hot Wheels Legends Tour. And about 3,600 cars battled for a spot in the final. With that kind of an impact, Hot Wheels decided to expand the idea to an additional three cities for 2019.

This time, quite a few Japanese cars made it through. Even more surprising, a 1960 Renault Dauphine won the event in San Diego. But the overall winner for 2019 was Greg Salzillo from El Segundo, California, in his 1957 Nash Metropolitan. If you've ever played Forza Horizon 4, you'll know what we're talking about.

The tour was a big hit once again, with over 110,000 attendees and almost 5,000 cars lining up for their shot at the prize. We all know how difficult 2020 was, so it's no surprise that the Legends Tour switched to an online format, with just 13 finalists.

Riley Stair won the tournament, and you can now buy a 1/64 scale replica of his 1970 Pontiac Trans Am in stores across the world. The Hot Wheels Legends Tour came back on a much larger scale in 2021, aiming at 14 countries around the world.

This time, the winner was a resident of the United Kingdom. You need just one glimpse of his 1969 Volvo P1800 Gasser, dubbed "Ain't No Saint", to understand why this car will be immortalized as a miniature vehicle shortly.

And now that you're up to speed with the history of the Hot Wheels Legends Tour, let's have a look at how it's all going down in 2022. So far, there have been a handful of events and the best is probably yet to come. Once again, the Tour will be reaching several continents, so the diversity of vehicles will once again be quite impressive.

So far, there have been two Livestream events, from Australia and New Zealand. For U.S. residents, the Tour has already made its way through locations such as Miami, Houston, Northwest Arkansas, and Atlanta. The list of winners includes the: 2008 One Buggy Mud Muncher Raptor, 1974 Mini Clubman "Frankenmini", 1998 Nissan 240SX, 1992 Autozam Scrum "Texas Toot" and 1927 Wayne Ford School Bus. Last but not least the winner of the Atlanta event is Austin McNeil's 1968 Volkswagen Beetle - the Hammerhead!

The next event is scheduled to take place on the 9th of July in Detroit, Michigan. Windsor, Canada is up next and then it's time to move on to El Segundo, California. It seems that the Global Grand Finale is set for the 12th of November, which means it might not be at the SEMA Show any longer. Either way, we can't wait to see what car the judges will pick this year! 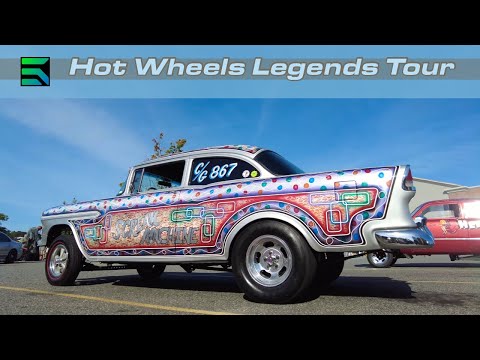