2 Hot Wheels RLC Exclusive R34 GT-R Coming Up, You'll Be Lucky if You Can Get One

3 Forza Horizon 5 Series 9 Is All About Hot Wheels, Here Is What’s Coming

For Hot Wheels collectors, every new Mattel release is an exciting one. Of course, it all gets more exciting when the new items are Real Riders models. Real Riders scale models were built to appeal to the adult collector, and they're much closer to the real deal than their cheaper counterparts. And every year, dozens if not hundreds of different models are being released to keep diecast fans around the world happy.
25 photos

At first, you'd think that you can learn all that is to learn about Hot Wheels quite fast. But you'd be wrong. It will take you years and years to become knowledgeable in this field. After all, Hot Wheels has been around since 1968.

But for today's history lesson, we are only going to go as far back as 2010. The Hot Wheels Garage series was launched as a successor to the 2009 Larry's Garage line. Larry Wood had been working for Hot Wheels since 1969, and having his line of cars was like a dream come true.

Fast forward to 2012, Mattel introduced the Hot Wheels Boulevard series. It only lasted for two years, and then it was followed by quite a long hiatus. In 2020, the brand name was revived as an adult collector-focused premium series.

And whenever you've got Premium and Hot Wheels in the same sentence, you know we're talking about Real Riders cars. For both 2020 and 2021, Mattel released a total of four mixes containing five or six vehicles. Mix 1 of 2020 included the Bone Shaker, Nissan Skyline R33 GT-R, Volkswagen T1 Panel Bus, 1967 Camaro, and the 1983 Chevy Silverado 4x4.

Mix 4 of 2021 was particularly cool, as it had the 1997 Mercedes-Benz CLK-GTR inside. Of course, if you didn't know about the existence of this series when it was launched, you can still get it on eBay. One seller is asking $599 for the full 2021 line-up. That's almost $30 per car.

And now, we're already looking at Mix 3 for 2022. You'll instantly recognize the 2012 Corvette Z06 Drag Racer. This has been part of the Boulevard series before, and it was also featured in the Hoonicorn vs the World challenge too.

This 4,000-hp beast was built by Alex Laughlin at Speed Society. And you'll be happy to see it features a removable rear section. Up next is the 2020 Toyota GR Supra. This is the fifth iteration of the new GR Supra, and we will probably see more color variations of it soon.

Mad Max fans will instantly recognize the 1973 Holden Monaro GTS. Finished in Mustard Metallic, this is a brand new casting for Hot Wheels. Mark Jones is the designer, and his history with Hot Wheels goes as far back as 1993.

After moving from the United States of America to Japan and then to Australia, it's now time to fly over to Europe for the Mercedes-Benz 300 SEL 6.8 AMG. This is perhaps not as exciting as the original Red Pig or the yellow version of the German sedan, but it's still a Real Riders vehicle nonetheless. 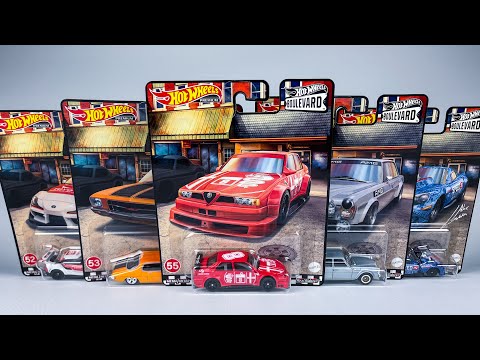