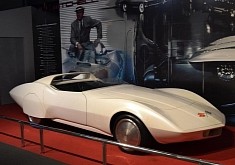 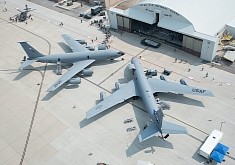 KC-135 Stratotankers Almost Kiss Each Other, Surrounded by Tiny Humans

25 Nov 2022, 08:19 UTC · By: Cristian Gnaticov / Besides the visual work, signed by artist and owner Ronald Ventura, this tuned Porsche 911 Turbo S features a few other upgrades as well

LaFerrari Driver Runs Out of Talent and Into the Guardrail, Destroys $3-Million Hypercar

14 Sep 2022, 11:32 UTC · By: Cristian Gnaticov / Fans of the hybrid hypercar born in Maranello should look away, as it is painful to see a crashed Ferrari LaFerrari. The accident happened in the Philippines

The Jeepney Camper Is Brilliant Upcycling

21 Aug 2022, 01:00 UTC · By: Elena Gorgan / Turning a staple of Philippine public transport into a glamping resort is a smart and very creative way of saving old units that are rotting away at junkyards

Nissan GT-R Goes Above, Beyond, and Under, Good Samaritans Fish It Out

19 May 2022, 22:40 UTC · By: Cristian Gnaticov / The driver supposedly forgot to engage the handbrake, that's why this Nissan GT-R ended up in the sea, but it seems that something else led to the outcome

Try Not to Cry: Smuggled McLaren 620R Gets Destroyed by an Excavator

18 Jun 2021, 16:50 UTC · By: Mircea Panait / The world has lost one of 350 McLaren 620R supercars ever produced over an importer that declared it as being a Porsche Cayman to avoid high import taxes

5 Aug 2020, 13:43 UTC · By: Elena Gorgan / New owner ships in new McLaren supercar but tries to disguise it as a Porsche, to avoid paying the higher duties and taxes

27 Jan 2020, 17:24 UTC · By: Bogdan Popa / Burger stand and a handful of other restaurants show up on Google Maps inside volcano, potentially directing drivers to the middle of nowhere

2 Aug 2019, 13:04 UTC · By: Elena Gorgan / Man sees bike inside victim’s shed and jumps over an iron fence to get it. Once inside, he realizes he has no way of removing the bike and is almost caught by t

18 Feb 2019, 17:36 UTC · By: Mircea Panait / Going on sale at the beginning of March 2019, the new Toyota HiAce promises more refinement, more efficiency, and more storage than its predecessor

10 Oct 2018, 09:13 UTC · By: Elena Gorgan / Jeffrey Delrio surprised Shiela Parayanon by scaring the life out of her first, but she still said yes. He even managed to get the traffic cops involved

2016 Honda Accord Sedan Debuts in the Philippines

17 May 2016, 12:46 UTC · By: Mircea Panait / As the economy of the Republic of Philippines continues to grow, the population's appetite for new cars also gets bigger

The Hoverboard Issue Is Reaching New Heights, God May Soon Get Involved

30 Dec 2015, 11:07 UTC · By: Vlad Mitrache / The hoverboards are turning into the most vilified objects of 2015; after being banned from airplanes, sidewalks and bicycle lanes, the churches seem next

30 Dec 2013, 11:03 UTC · By: Ciprian Florea / Honda has introduced a Mugen Limited Edition model for the City sedan, a vehicle built in India and offered in several markets in south and southeast Asia. The City Mugen, which will only be avai...

Daimler AG Donates For Victims of the Philippines Typhoon

Ford Mustang on Sale in Philippines

19 Jul 2012, 09:17 UTC · By: Mihnea Radu / Ford is clearly making efforts to turn the next-generation Mustang into a global vehicle. The simple fact that they are considering exporting the current model to places like Europe shows Blue Oval ...

Lexus LFA Arrives in the Philippines

Tricyles in Philippines to Get CNG Technology

26 Jan 2010, 08:12 UTC · By: Alex Vasile / Though getting things greener has been done in a lot of ways, people are still thinking outside the box and coming up with new ways to solve problems. One of the best examples is the effort of Energ...