1 The Terra Wind Amphibious Motorhome Is Most Luxurious, Crazy Way to Vacation

The year is 2021 and we can’t stop talking about or thinking about flying cars. The future, we’re constantly being told, is airborne and electric, and eVTOLs (electric vertical takeoff and landing aircraft) will one day replace passenger vehicles and, in the process, reshape urban mobility.

That may still turn out to be the case, though it probably won’t happen as early as 2025. Flying cars have always been a dream. Back in the ‘70s, Winnebago Industries went ahead and created not a flying car but a flying RV: an actual camper that could fly. It could land on water, too, if you were willing to spend extra.

Summer is the season of adventures, both on and off road. Recreational vehicles remain a solid choice for the more adventurous or more independent traveler, but they do have their limitations – one being the distance you have to cover. Not the Heli-Camper from Winnebago, though. It flew and it could float (though it couldn’t be actually driven on the road), and it was, in essence, the perfect vacation vehicle.

It is also one of the most insane but awesome recreational vehicles created to this day.

Marketed as “the most dramatic, comfortable, convenient and unique RV in the world,” the Heli-Camper wasn’t an actual Winnebago RV converted into a flying machine, but a giant helicopter decked as a home. Built under the Itasca Division of the company, it was a partnership with Orlando Helicopter Airways, which bought decommissioned helicopters at government auctions and converted them for a variety of uses, including passenger and cargo hauling.

The year was 1975, and Winnebago and Orlando were turning Igor Sikorsky’s dream of post-war travel, that of each family owning a helicopter for weekend getaways, into reality. Well, technically, they were trying to because, in reality, the Heli-Camper was never a commercial success.

The idea was simple: Orlando would buy Sikorsky helicopters from the U.S. government and, with Winnebago, it would turn them into RVs. So, the first Heli-Camper was introduced in 1976. Two floorplans were available because two models were used, the S-55 and the S-58. The latter offered 115 square feet (10.6 square meters) of living space, and touted accommodation for six people.

The interior was lavish for those times, based on the few photos that have survived. No word on where the guests could sleep or, for that matter, the pilot, but there was a full galley with stove and refrigerator, a mini bar, a dinning nook with parquet-topped table, cold and hot running water. The bathroom was spacious, with a hot shower and a toilet, and the living was a legit entertainment room, with music system and color TV. Access to the cockpit was also possible through the living. The cockpit was fitted with avionics equipment, though only clear-weather equipment was standard at those times. One urban legend recalls the time one pilot dropped down over the highway to read road signs and make sure he was on the right track, according to Airspace Mag.

The Heli-home had two water tanks and two holding tanks, full carpeting and soundproofing, a manual awning with the possibility to add an extra screen for privacy while you had dinner al fresco, air conditioning, heater, and a 3.5 kW generator. Owners could choose the interior and exterior colors, as well as the fabrics and some of the amenities inside. More importantly, they could opt for two different engines, the 800 hp variant or the 1,525 hp turbine engine by Pratt and Whitney.

Other awesome optionals included “such unique features as amphibious floats for water landings,” and “an electro-mechanical cargo sling.” Basically, Winnebago was saying that you could take the Heli-Camper even to places were finding a proper landing spot was tricky, because you could land it on water.

The Heli-Camper was not a commercial success, with Winnebago only producing and selling some six or eight units in total, none of which survived intact. But it was a roaring success in terms of brand awareness, being featured extensively on TV and in printed publications (including a full cover and cover story in Popular Mechanics), and a hit at RV shows. As the aforementioned media outlet notes, against the backdrop of rising fuel prices and a fall in demand for recreational vehicles, the Heli-Camper brought people back into Winnebago dealerships, if only to see the wonder that was this flying RV – the perfect camper that could also float. 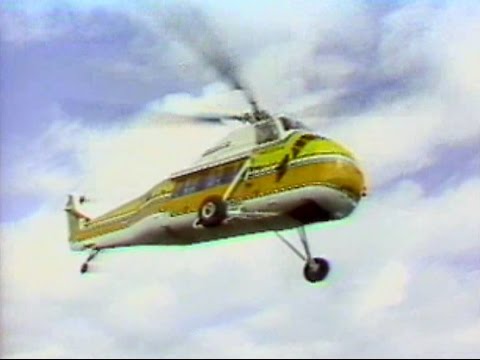 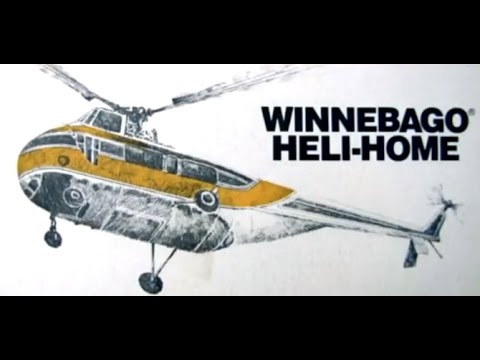