4 Hot Wheels Exclusive Custom Camaro Coming Right Up, It's Iconic in More Ways Than One

Floating McLaren P1 Calmly Exits a Garage by Itself, Hurricane Ian Spares Nobody

A few days ago, I was out on my regular Hot Wheels diecast hunt. While looking at the scale model cars on display, one of the store clerks approached me and said: "If you're looking for the red one everyone's so desperate about, they're all gone". She was talking about the mainline version of the Toyota Supra MK IV, and that just goes to show how the fear of missing out is starting to creep into the diecast community.

What most people don't realize is that each year, Mattel produces half a billion Hot Wheels. So, if you won't find that car you want right away, just have some patience.

While some people still haven't had a chance to find Mix 5 of the Retro Entertainment series, the guys over at Ministry of Diecast have already unboxed Mix 6. As opposed to the previous one, which was all about Fast & Furious cars, this new set is slightly more diverse. There are five items inside as usual, but there's a certain fantasy element to it all.

Less than a month ago we saw the new Hot Wheels Car Culture set focused on Jay Leno's Garage. And now there's a new vehicle from his collection that we can add to our 1/64 scale one. The EcoJet is a brand new casting for Mattel, and it's probably one of the coolest cars ever built.

With some help from GM, Leno introduced the car at the SEMA Show many years ago. This is a unique vehicle, that is environmentally friendly as the name suggests. And for many people, this will be the highlight of this five-item set.

But it will face some rivalry from the 1964 Lincoln Continental. This is a beautifully put-together design, and the fact that it made an appearance in the first Matrix movie is just a bonus.

This casting has been around since 2007, and we are getting close to its 30th iteration so far. A convertible version also exists, starting with the year 2000. We've only seen two variants of that in 2021, after an almost decade-long hiatus from production.

Knight Rider fans will be happy to see K.I.T.T. once again, even though this is the fourth appearance in the past three years. If you won't be able to find this new model in stores around you, it will probably be easier for you to track down the mainline version instead.

While you're it, be on the lookout for the futuristic K.I.T.T Concept. The fourth item in Mix 6 is not quite what you'd expect from a Premium set. This is not the first time Hot Wheels is offering the scale model replica of the RC Car from Toy Story, and it probably won't be the last either.

This casting was first made available in 2019, and then in 2020. There doesn't seem to be a visible difference between them, except for the fact that this new item was manufactured in Indonesia instead of Thailand. We've recently seen some people converting their Hot Wheels vehicles into fully-functional RC Cars and that would be a neat way to upgrade this Toy Story replica for sure.

Last but not least, we're looking at a recolor of the Wonder Woman Jet. This isn't the first time Hot Wheels puts out an airplane, and it's good to see that they're consistent with this idea year in and year out. Granted, the Metalflake Dark Gray version from 2020 had a stealth kind of vibe going on for it. Either way, this will go nicely along with the mainline version of the X-JET and the premium F-14 Tomcat that we showed you a few months ago. 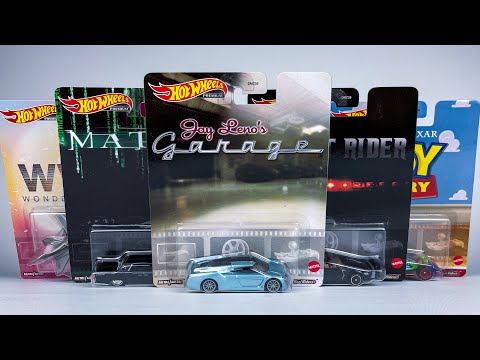