Trying to maintain two hobbies at the same time can be almost impossible if you don't have enough resources to work with. If you're into fast cars and bikes at the same time, you'd better have a solid paycheck every month. And the same goes for diecast collectors. Once you've started collecting Hot Wheels, it may be tricky to add Matchbox cars to the line-up as well: it will take more money, time, and space to get it all done.

But that's a dilemma that collectors will have to deal with. Mattel is doing an excellent job at pushing both Matchbox and Hot Wheels products, and it's using similar marketing strategies to get an even bigger share of the market.

Hot Wheels Premium items are highly collectible and exciting to look at, but the same values have been transferred over to the sister brand. The Matchbox Collectors series was introduced in 2021, with an initial batch of 20 vehicles.

On that list, you'll find cars such as the 1969 BMW 2002, the Lamborghini Centenario, the Porsche 550 Spyder, and the Mercedes-Benz G 500 Cabrio to name just a few of them. As is the case with Hot Wheels Premium cars, these vehicles are slightly more expensive than the mainline models.

You can generally buy one for about $10, but some models can go up to $15. Seeing that there were 20 items introduced last year alone, you'd have to spend roughly $300 to catch up from that point.

An extra 20 vehicles are part of the 2022 series, so let's have a look at five of them for starters. The 2020 Ram Rebel pickup is just what you'd expect to see in a Matchbox line-up. There's a Hot Wheels mainline version of this as well, but it's nowhere nearly as refined.

And by the looks of it, this is a brand new casting to be on the lookout for. The fact that you can pop the hood is a big plus, and you'd normally have to pick up an RLC version in Hot Wheels world to get that kind of feature.

Anyway, the Ram Rebel is the least exciting car in this set. The 1935 Ford Pickup that's painted black with Mooneyes graphic feels as if it was just built for the SEMA Show. And you have to love the matching yellow rims on the back of it.

There are no moving parts here, and the same goes for the 1995 Subaru SVX. This casting was designed by Ryu Asada himself and it was first featured back in 2019. This has to be the best livery so far, and the side stickers add a nice touch to the exterior design.

The last two cars in this set both feature opening hoods, and they were both built in the USA. But the 1964 Chevy C10 Longbed has got to be the star of this show. This is the second time we get to see this casting, as it was first introduced last year.

The rust-patina combo over the light blue paint job makes it look quite realistic and this is just the kind of product missing from the Hot Wheels lineup. The 2016 Chevrolet Corvette Stingray is the last vehicle in Mix 2, and you can't help but notice the size of the rear wheels.

But it all gets even more exciting once you lift the hood, revealing the V8 engine beneath. This is the fourth iteration of the Matchbox Corvette Stingray so far. Diecast collectors are quite used to seeing Corvettes, and you'll find plenty of them on shelves that are stocked with Hot Wheels cars.

But even so, the fact that it has moving parts is a big plus. We've managed to track down the whole set on eBay, and the seller is asking $46,99 for all five cars. That's slightly more than you'd expect to pay for a set of five Hot Wheels items, but let's not forget the added benefits here. 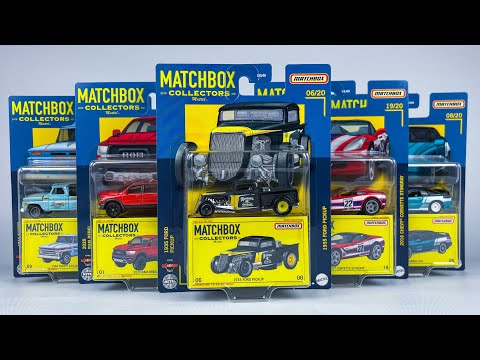