1 Hot Wheels Exclusive Custom Camaro Coming Right Up, It's Iconic in More Ways Than One

4 This Custom Ford Model T Was America's Most Beautiful Roadster in 1964, Can Now Be Yours

5 Inside the 2023 Hot Wheels Case A, Super Treasure Hunt Is Not What We Were Hoping For
Car video reviews:
Up Next

Even though 2022 hasn't ended yet, we're already getting glimpses of the 2023 Hot Wheels collection of cars. Introducing a new casting takes time and extensive testing is required before it can hit the stores. Now and then, Mattel will send some vloggers prototypes of the upcoming designs. We've seen it happen with the Ford Escort RS2000, and history is repeating itself.

It wasn't long ago that we saw the first unboxing of Case A for 2023. Even so, we expect that some people will get their hands on Case B quite soon. A big part of every new case usually consists of older castings that have been redesigned or at least repainted.

But the people at Mattel are aware of the fact that they need to bring something new to the table every year. And so, licensing new models is something they have to do to keep collectors happy.

Looking at 2022, there have been quite a few new castings including the Pagani Zonda R, the Lotus Evija, the Porsche 935, and the Ford Mustang Mach-E 1400 to name just a few of them. Most collectors out there are still two or three cases away from getting their hands on all the cool castings in 2022.

But everyone is already excited to see what the new hunting season will bring forth. And the guys over at Lamley Group have received a small package from the Hot Wheels design team to give us a taste of what's next.

First, on the list, it's the Ducati DesertX motorcycle. It will be interesting to see if Mattel decides to come up with more motorcycles shortly. Right now, bikes represent only a small percentage of the items released each year.

It may be more difficult for them to accurately recreate these on such a small scale, but it's still nice to see them trying. This new Ducati casting does feel slightly more exciting than the BMW R Nine T model launched in 2022. And that may be down to the fact that it has bigger fairings, thus allowing for more color.

Up next, we get a sneak peek of the El Segundo Coupe. While Fantasy cars are less attractive to adult collectors, this one is not on the same level as the Street Wiener for instance.

This isn't a ridiculous contraption, but instead a mix of design elements inspired by various sports cars. One thing they should do if they want this to register any sort of success is to get rid of those God-awful wheels. Other than that, some people might just pick it up if it has the right decals on.

It's always nice to see a 1/64-scale convertible model, and the BMW 507 sounds like the right way to kick off a new series of cars for 2023. White Hot Wheels cars aren't usually that exciting for some people, but the contrasting red interior does add personality to the whole thing.

All in all, people are probably going to love this new model. But it's not likely that it will be as popular as the next two ones. You can't go wrong with a classic Porsche.

And it's almost shocking to think that Hot Wheels hasn't released a replica of the 911 Carrera RS 2.7 before. Of course, you'll find endless variations of the 911, both old and new if you look for them.

We're not sure what kind of decals or color this new casting will come with, but we're bound to get several iterations of it within the next few years. We've saved what's best for last: the Audi 90 Quattro in IMSA GTO clothing!

Collectors have been quite ecstatic about the recent Audi castings introduced by Hot Wheels, and the most successful one has to be the classic 1994 Avant RS2. There's already a Super Treasure Hunt version of it out there, and it won't take long until we'll see one in a Premium collection.

The 700+ hp monster race car is reminiscent of the '80s turbo era of racing, and the exhilarating days of Group B and Pikes Peak. This can only go one way in terms of decals, and it's almost certain that most collectors will opt to buy at least one or two items as soon as it arrives in stores. 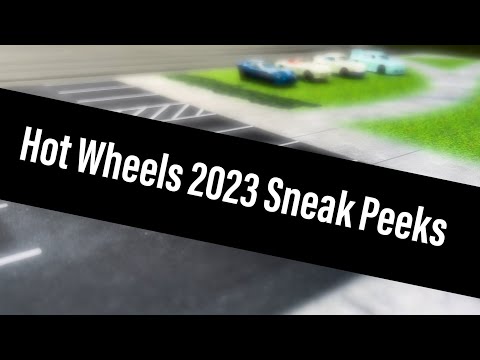