It feels like a new golden age is opening up for diecast collectors. With Hot Wheels and Matchbox both under the supervision of Mattel, more and more castings are coming off of the assembly lines. For those that don't want to go overboard with buying thousands of scale model cars every year, they are facing a crossroads of historic proportions. But some may be lucky enough to be able to collect both brands.

It was just recently that we got a sneak peek of a Premium series of Matchbox cars, and we can't stop thinking about that 1964 Chevy C10. But the new wave is already upon us. Even though you might have to wait a few months to catch the first case for 2023, we already know what's going to be inside.

Whereas Hot Wheels has the Super Treasure Hunt cars, Matchbox comes with the Super Chase version. And the first one for the upcoming series is a 1932 Ford Coupe Model B. As opposed to the sister brand, the Super Chase marker is visible here. You can also tell it's got something special about it by looking at the rubber tires, something you wouldn't see on the entry-level models.

Once again, it's not quite clear how rare these cars are. But you won't find them in all the cases, that's sure. Looking at the previous models, including the 2021 Ford Bronco and 2020 Chevrolet Corvette, you'll find different prices.

Some people are asking $140 for five Broncos, while others have listed the Corvette for $100. As the whole Super Chase phenomenon is relatively new to the game, scalpers probably aren't aware that they exist yet. And that's great news for anyone looking to build a nice collection.

There is one more distinct feature you'll notice with this case. There are 24 items inside, which is a third of what you'd get in a Hot Wheels one. The second car revealed in this new case is the 2021 Cadillac CT5-V.

This casting was just introduced this year, and we've only seen it in red so far. Moving on to an EV, the Tesla Model Y hasn't been around for long, either. Rumors have it that a Hot Wheels version of this car will be released in 2023 as well.

Until then, we'd rather enjoy the presence of some classic ICE-powered cars. And the 2020 Chevrolet Corvette looks fantastic in white. This basic Matchbox design is just as good if not better than its Hot Wheels Super Treasure Hunt counterpart.

If you're a big fan of this model, you might also want to look for the one featured in the Moving Parts series. The Road Roller looks like a great addition to your diorama; you'd just need to find something that looks like asphalt to bump up the realism level.

As Matchbox is celebrating its 70th anniversary in 2023, it's nice to see that, at least in some ways, they're staying true to their original ideas. The Mach-E has sparked a lot of interest ever since it was first unveiled to the public, and it comes as no surprise that Mattel wanted to shrink it down to scale.

Hot Wheels used the supped-up Mach-E 1400, so Matchbox was ready to fill the void with a bone stock model. The Nissan Hardbody is a fairly recent casting, having been released in 2020.

Even so, this marks its seventh iteration, perhaps the best-looking one up to this point. But it's not nearly as nice as the Rivian R1T, which collectors knew would be arriving this year. At first glance, all the details on it look good, but we'd need to get our hands on it before making a final assessment.

It's both funny and fitting that the next model to come out of the case is the MBX Cycle Trailer. If you can tow this behind a Matchbox truck, it could be worth it to get rid of the generic bike on the back in favor of the new Hot Wheels Ducati DesertX.

The 2021 Ford Bronco also made it in this 2023 case, and there have been three different variations of it by now. If you prefer the two-door version, that was introduced as a Moving Parts item earlier this year.

We'll save you some of the excitement of discovering the remaining cars in this case. But we'll conclude by once again saying that some collectors might forget about Hot Wheels entirely upon seeing what Matchbox is coming up with these days. 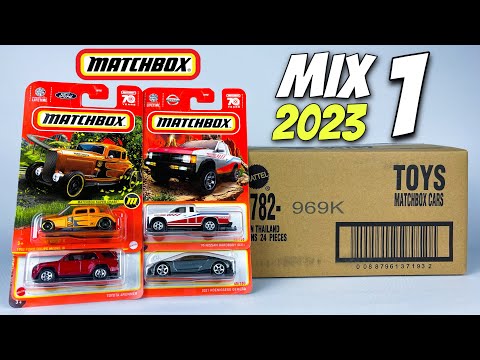 Tank Drives Thru Drive-Thru at KFC, Misses Everything but Attention and LaughsSee all coverstories