3 Widebody 1962 Volkswagen Beetle Really Looks Like a Bug, It’s Almost the Size of One

It feels like Mattel is pushing the pedal to the metal with Matchbox these days. While there might not be as many releases as you'd get with Hot Wheels, things are going into high gear with the diecast brand. More and more items are being launched every month, but some of the choices the company makes may seem odd. This time, we're looking at the 2022 France series which contains six vehicles.
21 photos

This is not the first time Matchbox is launching a series of cars that are representative of the Hexagon. In 2021, a total of 12 vehicles were produced with the French flag on them. Some of those cars were 100% Blue, White, and Red in origin: the Renault Master Ambulance, the 1968 Citroen DS, and the Renault Kangoo Express.

You can also understand why Matchbox included the Scania P 360 Fire Truck or the Lamborghini Gallardo Police car. But the rest of the line-up will seem rather strange.

Cars like the Audi R8, 1962 VW Beetle, and Porsche 911 Carrera Cabriolet may be a part of the French scenery, but they're still cars that were engineered in Germany. The 2022 Matchbox Germany series makes a whole lot more sense from that perspective.

Only 6 out of 12 vehicles have been made available so far, but they all fit the image. There are three Mercedes-Benz vehicles, one BMW, one Audi, and one Volkswagen included in the set. But going back to our main topic, you can get the 2022 Matchbox France series for as cheap as $20 depending on where you live.

At first glance, you'll notice that not much has changed since 2021. Only one car in the series can be labeled as French, and that's the Renault Kangoo Express. This seems to be the same casting as the one used last year, which takes away some of the excitement for this series. And the same applies to the Lamborghini Gallardo Police car.

The Tesla Roadster, Fiat 500 Turbo, and Jeep Renegade are all duplicates that have been featured before, and some fans are already upset about the lack of innovation. And while the 1990 Volkswagen Transporter Crew Cab could make a nice addition to your collection, it has also been used as a Fire Truck before, in the German series. 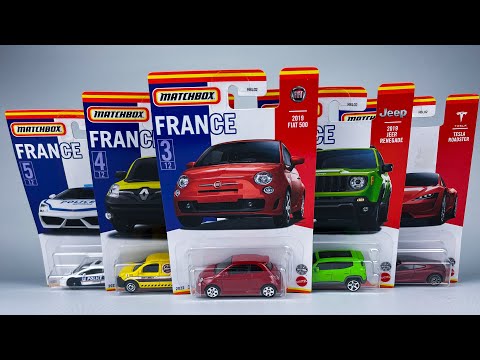