I will never forget the day I first saw Jurassic Park at the movie theatre. I was quite young at the time, but seeing dinosaurs on the big screen had a profound impact on me. Naturally, one particular vehicle used in the movie caught my eye as well. Years later, when the second and the third installment of the series came out, I was just as excited to watch them. But I can't say the same about the Jurassic World trilogy.
21 photos

But that tends to happen with cinemagoers. People that saw the first three Star Wars films tended to dislike the prequels. And if you've ever seen the original, 1993 Jurassic Park, anything that comes after that just won't feel as exciting.

But nostalgia aside, Jurassic World Dominion can now be seen in cinemas across the world. It has been getting mixed reviews, but it's not all bad. Matchbox has got a new diecast set for fans of the film and collectors alike.

Jurassic-themed diecast cars have been a thing with Matchbox for several years now. As you would expect, every time a new movie is launched, you also get the chance to buy various toys that are related to it. So it's no wonder that there were Jurassic World diecast cars launched in 2015, 2018, and even 2019.

While the 2015 vehicles weren't necessarily connected to cars featured in the film, things changed for the following series. And some of the cars used back then are also present in this 2022 set of six cars.

The graphics on the blisters look good enough to make you think twice about opening them up. But collecting diecast cars without releasing them from their plastic prison just isn't as fun as it should be. The 1993 Jeep Wrangler is the first car in this series.

This casting made its debut back in 2018, and there are three variations of it around: one with a canvas top, one with no roll bar, and this one that has a roll bar. This is a scale replica of the car used by Alan Grant, Ellie Sattler, and Ian Malcolm in the original Jurassic Park movie.

Without a doubt, the star of this Mix has to be the 1993 Ford Explorer. This is one of the two Explorers involved in the T-Rex scene. While number 04 was destroyed by the rampant predator, this one was abandoned onsite. Matchbox has even produced a replica of the crushed version if you're into that kind of thing.

The 2014 Mercedes-Benz G 550 is up next, and you'll be able to find at least five other previous variations of this casting. The Armored Action Transporter looks like it could successfully carry a scale replica Velociraptor around or any other miniature dinosaur that you might own.

The Armored Action Truck is a trip down memory lane for those of you that have seen Jurassic World: Fallen Kingdom. But if you're looking for something out of the ordinary, then you'll want to get your hands on the Gyrosphere. That was a pretty interesting addition to the movie, but some of the diehard fans might complain that the old school Explorer was still a better choice for taking tourists out in the park. 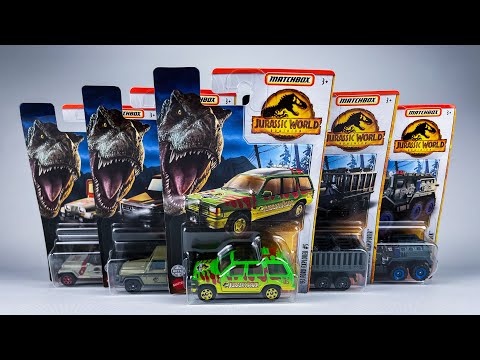