If there's a will, there is a way. Let's say you're addicted to drifting, but you can't afford to get involved in the sport. There are a few options. One, you can go to a drift school and have some fun there. Two, you can start drifting in Assetto Corsa if you've got a basic racing rig. Or three, you can get an RC Car.
17 photos

And I can vouch for the RC Car. I tried it out myself a few years ago, and it's almost as fun as real-life drifting, minus the G-forces. Of course, a basic radio-controlled drift car is going to set you back about $300, but you're going to have to spend more than that if you're thinking about going pro. I've seen RC drift cars worth more than $1,000, but they're guaranteed to provide hours and hours of sideways fun.

And I guess this approach can be applied to multiple categories of interest: boats, airplanes, motorcycles, and so on so forth. But what would happen if you'd use an RC car in a drag race against regular-sized vehicles? For today's challenge, the match-up is even more insane than you could have imagined. The RC car is going to take on a Honda NSX and a Red Bull F1 car! Talk about a David versus Goliath kind of match-up.

The radio-controlled speed machine is built by a company called Arrma RC. This is their only product that's capable of hitting speeds over 100 mph (160 kph). It's a 1/7 scale brushless-motor racer that comes with 4WD. The rolling chassis weighs about 8.6 lbs (3.9 kgs) and it first went on sale back in 2019. The car that's taking on today's challenge was built using a budget of about £1,400 ($1,890).

Lining up for the first run, you can't help but feel intimidated by the exhaust note of the F1 machine. But the moment the lights go green, it's the little RC car that rockets into the lead. The NSX isn't off to a bad start, thanks to its AWD. But as soon as David Coulthard gets some grip in the RB7, he moves into second place and starts chasing down the Arrma Limitless.

By the end of the run, the Arrma RC scores a crushing victory, proving that size doesn't always matter. For the second race, the RC car bumps into some technical issues and is unable to repeat the result. But everything's back online for the third run, and it manages to score its second victory of the day, crossing the quarter-mile (402 meters) finish line in 8.6 seconds. Meanwhile, the RB7 was 0.9 seconds slower, while the Honda needed a total of 11.3 seconds.

For the last but final test of the day, all three machines will be going flat out once they hit 50 mph (80 kph). A rolling race is likely to have a different outcome, considering that the top speed of the RC car is much lower than that of its opponents. We wouldn't like to spoil the results for you, but let's just say it's going to be pretty intense. The braking test also provides some surprising results, and the conclusion is that the NSX was quite outgunned for this challenge. 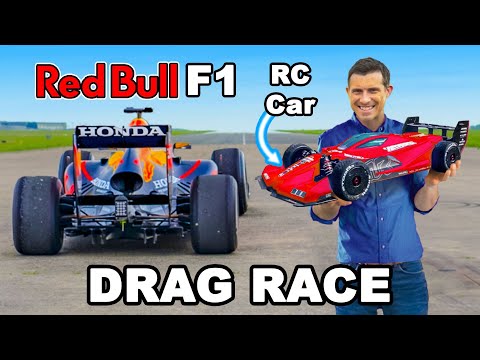