2 Was the World Ready for a Toyota Supra Wagon Almost Three Decades Ago?

Dragos Chitulescu
When I started looking for a sports car to add to my garage a few years ago, I went through quite a few models before deciding on the RX-7. I had driven a Renault Clio RS197 before, but I wanted to get a Japanese car instead. After testing a 2010 Type R, I decided I wanted a turbocharged RWD car instead. But today, I can't help but wonder if the reliability of a modern car wouldn't have made my life a whole lot easier.
11 photos

Granted, a 2010 Honda Civic Type R will never be as exciting as a 1991 Turbo II RX-7. But the Type R is most likely a much more reliable machine. And it's going to feel more comfortable while providing more miles to the gallon.

Also, taking the RX-7 out when it's snowing or raining hard, you'll need to be careful with your throttle inputs. But with a modern-day vehicle, you get the benefit of several driving aids to make your life better. Again, less exciting, but probably better.

Choosing between an MK IV Toyota Supra and MK V boils down to one question: what are you hoping to get out of it? An additional question would be: what kind of budget are you willing to spend to bring it up to the desired spec?

These days, a Supra that's packing a 2JZ-GTE engine might set you back more than a brand new one would. It's not uncommon to see one selling for more than $100,000. If you aren't looking at it as a form of investment, you can opt for a NA model and build from there.

So you might tend to choose the older model for its looks, the engine sound, and raw driving experience. And that's fine. But when it comes to reliability, comfort, and straight out of the box performance, the odds are not in its favor.

And today's video is only going to reinforce that statement. Grip levels are less than ideal, and two tuned Supras are about to go head to head down the quarter-mile (402 meters). The 2020 GR Supra is packing roughly 550-hp while still running on the stock ECU.

With a serious set of tires and 20+ years of development compared to its predecessor, it should be quite user-friendly, even on a damp track. The MK IV Supra is nowhere near stock, as you would expect. Other than picking one up in an attempt to make a future profit, it would be a shame not to fiddle around with the engine and chassis.

And this particular car has one important, modern component inside: a BMW M4 DCT gearbox! A fully built 2JZ-GTE, running a Borg Warner 8374 Turbo, churns out 700-hp. In theory, this MK IV should be faster than the MK V, at least while going down a straight line.

But a standing start isn't its strong point, especially in the wet. Run after run, the newer Supra comes out on top. The MK V records a fast run of 12.38 seconds, with a trap speed of 125 mph (201 kph). The MK IV is 0.67 seconds to the finish line, but there's still hope left.

The rolling race should provide an equal fighting chance for the older, more powerful car. Keeping 700-hp in check is not always as easy as it sounds, and the MK V Supra wins the first run. The driver of the MK IV is not about to quit just yet, and he manages to win both of the last runs.

Granted, the gap isn't that impressive, but the score is now even. Now, you have to ask yourself: if you're aiming for real-life performance with added comfort and reliability, is an older Toyota Supra still a sensible option? 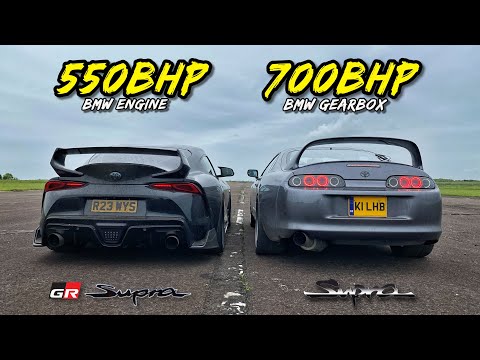