1 The Volga V12 Coupe Is a Stereotype-Defying, BMW M-Powered Custom From Mother Russia

2 2JZ-Swapped, RWD-Converted 2005 Subaru Impreza WRX STI Is Rad As Rad Can Be

3 2JZ-Swapped Lamborghini Gallardo Will Blow Your Mind and Ears

For the past fifty years, BMW’s M division has given us many iconic high-performance vehicles. Arguably the most controversial was the rare Z3 M Coupe, an example of which became even more controversial when it received a turbocharged Toyota 2JZ courtesy of South African tuning house RAPiD Fabrication.

Introduced in 1995 as a successor to the quirky Z1, the Z3 was a two-seat roadster based on the E36 3 Series platform. The first BMW model to be fully assembled in the United States, it initially came with a naturally aspirated four-cylinder that made it quite boring.

The Z3 became a bit more interesting starting with the 1997 model year, when an inline-six was added to the engine lineup and an M-tuned version became available. That year, at the Frankfurt Motors Show, the Bavarians also unveiled a Coupe variant. The pet project of BMW’s research and development chief, Dr. Burkhard Göschel, the car was developed by a small group of engineers in their spare time with the aim of delivering a stiffer chassis that would dramatically improve the car’s maneuverability.

Although it was ridiculed by members of the automotive press, as well as many enthusiasts who nicknamed it Clown Shoe, the coupe chassis proved to be fundamentally better than the roadster, which convinced the company’s management to approve series production. In 1998, the M-badged Coupe also hit the streets. With up to 316 hp (in the EU version), on that stiffened chassis, he Z3 was finally an exciting driver’s car. Performance peaked in 2001 when the E46 M3’s S54 straight-six was fitted inside both North American and European models.

One of these ultra-rare, S54-powered Coupes made its way to South Africa where it was purchased from its original owner by Desmond Rudman. He kept it stock for several years, but at some point, the thought of adding more power started to seep into his mind.

With the help of his son, Jonathan, who owns a local tuning garage called RAPiD Fabrication, Desmond started exploring the option of turbocharging the S54. However, they soon abandoned that plan and decided to go for something more outrageous.

Turbocharging the S54 was not a complicated endeavor, but in case something went wrong, and they ended up blowing the engine, sourcing a new one was just too expensive.

A cheaper, but highly-controversial alternative was found by Jonathan in the shape of an ex-Supra 2JZ-GTE engine that was available in Japan for a bargain price. He brought it and had it shipped to their garage in Gauteng, where it was comprehensively upgraded before being transplanted to the M Coupe.

The legendary Toyota six-cylinder got a new aftermarket cylinder head, high-flow intake manifold, a single 100-mm (3.93-inch) throttle body, 960-cc injectors with Chevy LS1 coils, and, of course, a Garrett GT45 turbocharger with a large, custom-built intercooler. The stock silencers were retained and connected to an equal-length stainless exhaust manifold via a custom 89-mm (3.5-inch) system.

The car’s limited-slip differential was also retained, but the ZF S5-31 five-speed manual that came from the factory was unable to cope with the power of the modified 2JZ. To solve this problem, the Rudmans installed a gearbox from a Toyota Hilux D4D pickup truck and upgraded it with a high-performance copper clutch.

For the suspension, KW coilovers were added, while the stock BMW M brakes remained in place - albeit fitted with a set of new Ferodo Racing pads.

Finished with a fresh coat of Blu Passione Pearl taken from Maserati’s stock color palette, and sitting on custom 18-inch wheels wrapped in Yokohama Advan A048 semi-slicks, the 2JZ-swapped M Coupe was initially capable of no less than 536 hp. This setup proved to be a bit too much for the car’s short wheelbase, and a smaller Garrett GT30 turbo was subsequently fitted, dropping the output to a more-manageable 400 hp.

The best thing about this project is that every single modification is reversible. The S54-equipped M Coupe is a rare model, and its value has begun to rise in recent years. With that in mind, Desmond and Jonathan kept the stock components they swapped out and the car can be put back together in its original configuration with ease. So, BMW purists can breathe a sigh of relief because no M Coupe was harmed during the development of this 2JZ-powered beast.

Completed in 2013, this custom Bimmer has been tested by various automotive publications that praised the exquisiteness of the tuning performed by the team at RAPiD Fabrication, as well as the tamable, yet drift-friendly attitude of the car. One such test was performed by Cars.co.za in 2020 and you can see the results in the YouTube video below. 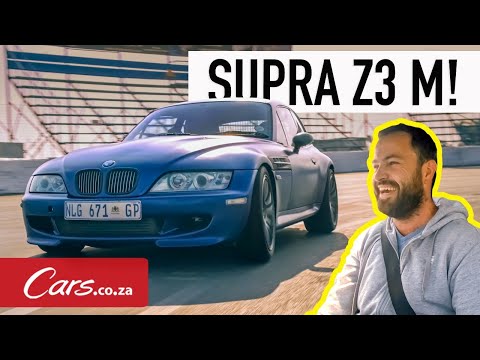