Although they are targeting very different customers, the GR Supra 3.0 and M240i xDrive aren’t all that different where it matters. Both sports cars feature similar underpinnings, and both use ZF 8HP trannies.
11 photos

That’s 1,542 kilograms if you prefer the metric system. The brand-new 2er, on the other hand, levels up to 3,871 pounds or 1,756 kilograms, which is kind of curious because the Supra looks a bit larger from most angles. But in truth, the Bimmer is longer in both overall length and wheelbase. As for the biggest reason for this difference in weight, one shouldn’t forget that xDrive refers to electronically controlled multi-disc clutch all-wheel drive.

The B58 in the M240i xDrive features the same output figures, and similar to the Supra, these numbers more likely refer to what’s produced at the wheels rather than the crankshaft. BMW underrates this powerplant in pretty much every single application. Even the M3 and M4, which use the M-tuned S58 engine, develop more ponies and pound-feet than advertised.

On that note, which of these fellas do you think it’s quicker in the quarter mile? Two out of two dig races end in victory for the 2er, which is only natural given the additional traction offered by the xDrive system. But in two out of two roll races, the remarkably lighter Supra comes into its own.

At press time, prospective customers have to pony up at least $51,890 for the straight-six Supra, which is produced in Austria by Magna Steyr. Over at BMW, the Mexico-made M240i xDrive currently retails from $48,550. 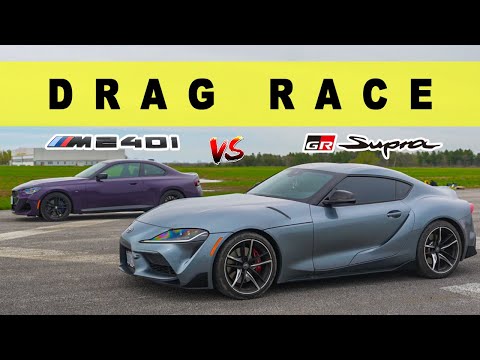