Due to its German DNA, as it shares many nuts and bolts with the latest BMW Z4, the new-gen Toyota GR Supra has been deemed unworthy of the ‘Supra’ moniker by some of the model’s hardcore fans. But is that really the case?
10 photos

As we have come to learn since 2019, when the A90 entered production, it is a feisty machine, capable of giving its occupants a shot of adrenaline when being thrashed around. It’s not bad at doing daily stuff either, as you can still take your kid to school in it, and do the occasional grocery run.

Moreover, with a little bit of work, or actually an overwhelming amount in this case, it can give full-blown exotics a run for their money. With sticky tires on its feet, a missing headlight to suck in more air, and a mandatory parachute mounted at the rear, the black example depicted on video down below is a true supercar killer.

Filmed at the Race1000 event in Germany, it tried its luck against a new-gen Porsche 911, a Chevy Corvette C7, and an Audi R8 V10 Plus. And it came out on top of them, turning out to be quicker even than the latter, which can trace its DNA to the Lamborghini Huracan. Thus, in theory at least, it might just be able to put the V10-powered Raging Bull in its corner, on a good day.

But what has the owner done to it to turn it into a straight-line monster? Well, they obviously reworked pretty much everything, for a staggering amount of power. In fact, the video uploader claims that this bad-to-the-bone Toyota GR Supra has around 900 horsepower available via the fun pedal, which makes it much more powerful than the modern-day supercar establishment, or most of it anyway. But enough babbling about it, as you should scroll down and hit the play button to see what it can do down the half-mile. 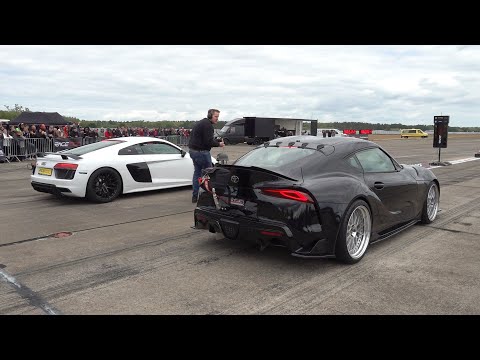