2 Schuppan 962CR: The Spectacular ’90s Supercar Based on a Le Mans-Winning Porsche

5 1988 Porsche 962 Raced by Derek Bell and Tiff Needell Can Now Be Yours
Car video reviews:
Up Next

Chipmakers Are Having the Time of Their Life, It Could All End Abruptly

From 1981 to 1987, Porsche won the prestigious 24-Hours of Le Mans race seven times in a row. It all started with the successful 936, which was replaced by the extensively redesigned 956 in 1982. Four years later, it evolved into the 962C, one of the greatest race cars ever built.

The Story of the Dauer 962 LM, a Le Mans-Winning Porsche Unleashed on Public Roads

Bordering perfection, this outstanding vehicle was the holy grail for many collectors who dreamed about owning one that they could legally drive on public roads. Porsche toyed with the idea of building such a variant, but since the manufacturer was struggling financially during the late 1980s, this idea never materialized. Luckily, smaller companies like Koenig Specials, Vern Schuppan Ltd, or Dauer Sportwagen decided to capitalize on the demand for street-legal 962Cs and began developing them during the early 1990s.

Out of the resulting limited-production, road-worthy race cars, the Dauer 962 Le Mans (often abbreviated ‘962 LM’) is unquestionably the most successful design, as it was not just a breathtaking supercar that could be driven on public roads but also served as the base for another Porsche-badged Le Mans winner.

The story starts in the second part of the 1980s. Former racing driver Jochen Dauer founded a racing team in Nuremberg, Germany, and entered it into various competitions. They mainly raced 962s purchased from Porsche, cars which helped them win the 1988 European Interserie championship. Unfortunately, the next two seasons were disastrous, and with funds quickly depleting, the team was forced to retire from motorsport.

Left with several 962 chassis that were beginning to gather dust, Dauer created a new company aiming to convert the racing prototypes into ultra-exclusive (and ultra-expensive) road cars. By 1993, the first one was ready, and it made its debut at the Frankfurt Motor Show. Thanks to YouTube user GTBOARD.com, you can watch a rare video of the unveiling below.

Unlike the Schuppan 962CR or Koenig C62, the Dauer 962 LM wasn’t built from scratch around a Porsche race engine. It used an existing race car chassis that was refurbished and fitted with a hydraulic suspension system for homologation purposes. In other words, customers weren’t just getting an exclusive vehicle that was inspired by the 962C and used similar components, but an authentic race car in road-legal guise.

The carbon fiber body was completely revamped by the experts at Lola Composites. Its aerodynamics were improved, yet the resulting design was nearly identical to the legendary Porsche.

Arguably the toughest task was to create an upscale interior that could accommodate two passengers. It was undertaken by the interior wizards at Reinald Mattes, who managed to squeeze in an additional seat, create two storage compartments (mandatory for road homologation) under the scissor doors, design a new steering wheel, and wrap everything in genuine leather.

Power came from the original Porsche Type 935 twin-turbocharged 3.0-liter, flat-six that had its air restrictor removed, which unleashed around 720 hp. Linked to the race-spec, five-speed sequential manual, the rabid engine could propel the 2,381-lbs (1,080 kg) supercar to 62 mph (100 kph) from a standstill in just 2.8 seconds, according to independent tests conducted in 1998. Even more impressive, it could reach a top speed of 251.4 mph (404.6 kph), a mind-blowing figure that, to this day, makes it one of the fastest road-legal vehicles ever built.

Although the 962 LM was an incredible feat of engineering and was homologated for road use shortly after its 1993 debut, Dauer was struggling to secure the funds needed to continue production.

The businessman’s true intention was to build a race version and take it to Le Mans, where it could race in the new GT1 class alongside other production-based cars. It turns out his team of engineers was secretly developing a race car, but this project was also halted due to a lack of funds.

By this time, Porsche was preparing for a Le Mans comeback, but they faced a huge dilemma. Racing the iconic 962C chassis in the LMP1 class was possible, but the rules limited output to 550 hp and a 50-liter (13.2 gal.) fuel tank, which would have made the car uncompetitive. The other option was to develop a 911-based racer for the GT1 class, but they didn’t have the time or money to complete it.

Thankfully, famed engineer Norbert Singer who was aware of Dauer’s project, suggested a partnership that would allow Porsche to race 962s in the GT1 class thanks to the 962 LM’s road-legal status, meaning that they could use a 650-hp engine and a 120-liter (31.7 gal.) tank.

After agreeing to terms with Dauer, a joint team of engineers built two race-spec cars, and even though the 24-hour race’s governing body (ACO) desperately tried to ban them, both were eventually allowed to compete. After a heated battle with the two factory-backed Toyota teams, which were the clear-cut favorites, the no. 36 Dauer 962 LM driven by Yannick Dalmas, Hurley Haywood, and Mauro Baldi crossed the finish line first, while the second car shared by Hans-Joachim Stuck, Danny Sullivan, and Thierry Boutsen finished in third place.

The Le Mans triumph, along with the newly established partnership with the Stuttgart-based manufacturer, gave Dauer the necessary funds to continue building the road-legal, Porsche-badged cars. According to multiple sources, 12 to 13 units were produced between 1993 and 1997 (including the race cars), and they had a price tag of around $1.2 million ($1.8 million today. The biggest fan of this marvelous vehicle was the Sultan of Brunei, who bought five of them. 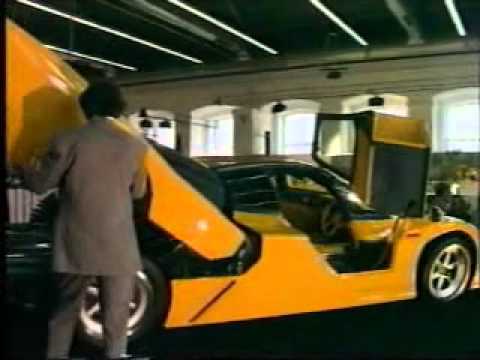