3 A Comprehensive Look at the Legendary Toyota 2JZ Engine

Ask any car enthusiast which company makes the most reliable cars, and you’ll get the same answer: Toyota. A huge number of vehicles built by the Japanese automaker two or three decades ago are still on the road today. Among them is the Lexus LS 400, a legendary sedan powered by one of the most reliable V8s ever built.

Toyota 1UZ-FE: The Over-Engineered Gem That Became One of the World’s Most Reliable V8s

Toyota’s second production V8 was the result of a top-secret project called F1 which started in 1983. No, it had nothing to do with the world’s premier single-seater competition dominated by rivals Honda during the second part of the 1980s. The abbreviation came from “Flagship number 1” and the goal of the project was to create a topnotch luxury sedan that could go head-to-head with flagship models from the likes of BMW, Mercedes-Benz, or Cadillac.

Directed by the company’s legendary chairman, the late Eiji Toyoda, who did not impose a deadline or a budget limit, F1 was Toyota’s most ambitious endeavor. It employed 60 designers, 1,400 engineers, 2,300 technicians, and 200 supporting staff members, all led by chief engineer Ichiro Suzuki.

If the extraordinarily large number of people that worked on this project isn’t impressive enough, the result of their intensive labor will undoubtedly blow your mind. According to the manufacturer, the team created 450 individual vehicle prototypes and close to 900 experimental engines.

The powerplant that showed the most promise was a 32-valve, quad-cam, 90-degree V8. During those times, Toyota was making a name for itself by building some of the most reliable and efficient engines in the industry, so this new eight-cylinder had to be as close to perfection as humanly possible.

To achieve that, engineers put the unit through one of the most rigorous tests conceivable. Before entering production, it clocked over 1.67 million miles (2.7 million km) of real-world test drives through some of the harshest conditions in the world. Prototype vehicles equipped with this V8 were driven across the icy roads of Northern Europe or sandy paths of Saudi Arabia.

In 1989, six years and approximately $1 billion later, the secret was out when Toyota unveiled the LS 400, as well as the Lexus marque which aimed to snuff out the newly established Acura and Infinity brands in the North American market.

The new sedan came with the latest technologies of the era, offered all the creature comforts imaginable and best of all, it was cheaper than a BMW 7 Series or a Mercedes S-Class. In addition, it was quieter, more powerful, and delivered better fuel economy than any of its rivals thanks to the amazing 1UZ-FE.

Oversquare by design, with a bore and stroke of 87.5 mm × 82.5 mm (3.44 in × 3.25 in), the all-aluminum unit displaced 4.0 liters (242 ci). Like other legendary Toyota engines, the block was thoroughly reinforced to ensure unparalleled reliability. Inside it, engineers placed a sturdy forged steel crankshaft with eight counterweights, two more than what most production V8s usually employ. Equally impressive were the six cross-bolted main bearing caps, another feature rarely seen in a block that’s not intended for racing.

It turns out that this configuration was actually based on a race-spec unit intended for CART (today’s IndyCar), a detail confirmed by David Currier - then-vice president of TRD USA - in a 2007 interview.

Moving on to the internals, we find sintered forged steel conrods connected to hypereutectic pistons with finely grooved skirts that minimize frictional losses and optimize lubrication.

Unlike the motorsport-derived block, the cylinder heads were designed with fuel economy in mind, so they weren’t as impressive for high-performance enthusiasts. Each featured two conventionally-profiled cams per head and to attain a compact packaging, only the intake cams are driven by the timing chain, while the exhaust cams were set in motion by a gearing mechanism that connected them to their intake counterparts.

In its original form, the engine had a 10.0:1 compression ratio that enabled an output of 256 hp and 260 lb-ft (353 Nm) of torque. It was revised for the 1995 model year, receiving a host of upgrades which included lighter rods and pistons, sequential fuel injection, new cams with a slightly more aggressive profile, or an improved exhaust manifold. The compression ratio increased to 10.4:1, resulting in an increase of power to 261 hp and 269 lb-ft (365 Nm) of torque. A second revision came in 1997 when among the new goodies Toyota added its trademark VVT-i (variable valve timing) technology. In this final form, the V8 could make up to 300 hp and 310 lb-ft (420 Nm) of torque.

Regardless of the version, power was more than adequate for its application but apart from that, the 1UZ-FE stood out when it came to unparalleled smoothness and reliability. During a 1990 Top Gear episode Chris Goffey put a glass filled with water on top of it while at idle and the liquid didn’t budge. Moreover, the engine was revved close to the redline, and the glass barely moved.

In terms of reliability, this engine is legendary. The LS400 made the Consumer Reports list of recommended vehicles that can last for over 200.000 miles (321,869 km) with regular maintenance back in 2007. Nowadays, many owners who took adequate care of these cars have actually recorded three times as many miles, sending odometers into a frenzy.

The 1UZ-FE was produced until 2002, and ended up powering three generations of the Japanese market Toyota Crown Majesta, the successor of the LS 400 (called Toyota Celsior in Japan). It was also used in the Lexus SC 400 and the first two generations of the GS 400.

It’s also one of the first automotive engines that were approved for aircraft use by the US Federal Aviation Administration (FAA) in 1997, morphing into the twin-turbo, 360-hp FV2400-2TC. Designed in partnership with Hamilton Standard and intended for use in four-seat propeller airplanes, it never made it into production, but managed to prove just how good the 1UZ-FE architecture was.

Another version called VT300i did make it into production outside the automotive sector in the late 1990s, finding its way into the Toyota Epic powerboat range which, contrary to its name, was by no means an epic series of boats.

Thanks to its bombproof bottom end, the V8 eventually made it into a racing car, the Toyota MR2 SW20-derived SARD MC8-R. With twin-turbos and capable of 600 hp, this version developed by Toyota’s SARD (Sigma Advanced Research Development) works team competed in the GT1 class but never managed to achieve any noteworthy results.

Despite its failure in motorsport, the 1UZ-FE remains an impressive, over-engineered masterpiece. The product of an outlandish project, it goes down in history as one of the smoothest, most reliable eight-cylinders of all time.

If you would like to learn more about this legendary engine, I recommend watching the video below, posted on YouTube by driving 4 answers. It helped make this article possible and superbly covers every minute detail about the 1UZ-FE, including its tuning potential. 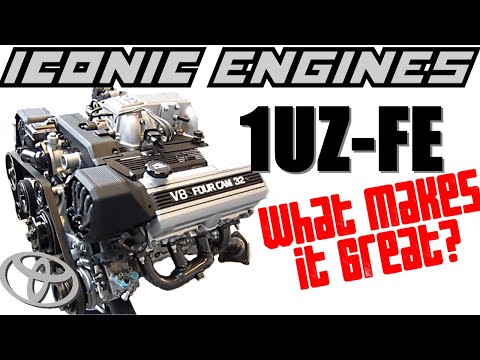