Developed around a JZA80 chassis and powered by a masterfully tuned 2JZ, this one-off ride built in Japan ten years ago is arguably more spectacular than the fifth-generation Supra.

Meet the Abflug Schwarzer: A Unique Mk4 Supra With Supercar Looks and Performance

The Supra has been one of Japan’s favorite cars ever since it was part of the Celica lineup. In the mid-1980s, it became a standalone model, and six years later, with the introduction of the A80, it transformed into a modern sports car powered by one of the best six-cylinders ever built.

This legendary powerplant made it the weapon of choice for many tuning enthusiasts. Once the habit of modifying stock cars into incredibly powerful machines became the coolest thing on Earth, the A80 Supra turned into one of the most sought-after vehicles out there thanks to Hollywood and the gaming industry.

Back then, tuning the engine and chassis weren’t enough to stand out, and those who modified their rides would add outrageous body kits, a sound system loud enough for a music festival, and as many LCD screens as they could possibly fit inside the cabin.

When it came to outrageous body kits, Supra owners all across the world drew inspiration from Abflug’s builds. The name comes from the German word for takeoff, but the company is all Japanese, and they have been producing spectacular aero parts ever since the late ‘80s.

Apart from those who dreamed about one of their body kits and ventured into custom fabrication trying to replicate them, there were Supra owners who could not only afford the real thing but dared to order a one-off tailored to their specifications.

This is where we meet Akihiro Tamura, the owner of a 1997 JZA80 which became his obsession. Determined to have the most unusual custom Supras ever conceived, he approached Abflug’s president Uwabo Masamichi with a crazy request. He didn’t want any of the upgrades available in the company’s catalog but an entirely new, supercar-inspired body.

Masamichi obliged and handed the task down to a team of designers who worked alongside Tamura to turn his dream into reality. After spending a lot of time, money, and fiberglass, the incredible body was ready to meet the Supra chassis which received Abflug European Taste adjustable dampers and stiffer springs, along with an Endless Racing brake kit.

As you can see in the video below posted on the project’s YouTube channel, one has to look long and hard to discover traces of the original model because almost every factory panel was stripped down and replaced with a custom-built version. When viewed from the rear, the car looks more like a Ferrari than a Toyota since it uses a set of tail lamps borrowed from the 360 Modena and a diffuser that was initially made for the same Italian supercar.

Everything else is fabricated by Abflug specifically for this project including components such as the HID headlights or the hydraulic scissor doors that reveal the Alcantara-laden bespoke interior. Here too Abflug went all out, modifying the entire layout and adding a couple of Bride Stradia Japan SPL seats, a set of Defi Step-Master gauges, and a custom 325 mm (12.8-inch) Ital Spirit Schwarzer steering wheel designed in-house.

Finished in a flawless piano black paint and sitting on a set of 19-inch Gran Revolfe Prism II wheels, the car dubbed Abflug Schwarzer needed a capable engine to match its aggressive looks, so the 2JZ was sent to PentRoof where it was disassembled to the bare block and fitted with a host of aftermarket goodies such as ported and polished heads equipped with more beefed-up cams or a big Trust T78-33D turbocharger. From the headers and all the way to the twin tailpipes, Abflung completed the setup by fabricating a custom titanium exhaust system.

Mated to a Getrag six-speed manual, the finished unit could spit out 620 horses and in case you’re wondering, it wasn’t moved midship because that would have required a completely new chassis. It could also produce a massive 650 lb-ft (884 Nm) of torque transferred to the rear wheels via a two-way TRD limited slip.

Details about this car are scarce in the English-speaking parts of the worldwide web, but thanks to our colleagues at PASMAG.com, who interviewed Akihiro Tamura back in 2013, we know that it could reach a top speed of 201 mph (323 kph) and run the quarter-mile (402 m) in in a blistering 10.8 seconds - about as fast as a Mercedes-Benz CLK GTR.

Out of all the custom, Supra builds I’ve seen in more than two decades, this unique ride is one of the most audacious and creative. I know that some people won’t agree, but I’ll go as far as calling it a work of art of the Japanese tuning scene.

When Toyota unveiled the fifth iteration of the iconic sports car at the 2019 North American International Auto Show, it sent JDM fans into a meltdown. While the styling was more than adequate, the car’s BMW underpinnings and powerplant outraged those who expected a modern 2JZ version.

Instead of partnering up with the Bavarians for the project, the Japanese manufacturer should have looked in their own backyard and team up with Abflung to design it. Sure, a modern 2JZ would have cost more to build than buying a BMW mill, but one can dream about how a 100% Japanese-developed, Schwarzer-inspired Supra would have looked like. 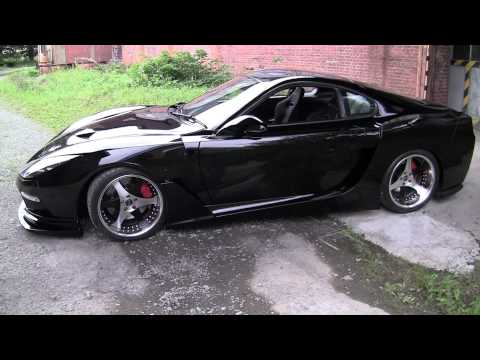