They said that EVs might kill the entertaining quarter-mile dragstrip show of force after each subsequent Tesla upgrade further pushed the boundaries of production cars. But that is not necessarily true.
23 photos

Right now, it is a valid stance that few production vehicles even stand a remote chance when duking it out with the 1,020 horsepower Tesla Model S Plaid at the track. Especially when one is at full charge and the person behind the wheel knows exactly what he/she is doing, like in this case. And we have that put into the proper perspective.

The videographer behind the Drag Racing and Car Stuff channel on YouTube has prepared (in its latest video embedded below, uploaded on August 18th, 2022) another example of the recent ICE vs. EV variety. And until at least everyone drives an EV and there are no more ICEs around, these will tend to be fun and (sometimes) surprising.

Plus, this one is for General Motors enthusiasts, complete with a cool muscle car twist. So, the initial skirmish, taking place at Cincinnati's Premier Championship NHRA drag racing facility, aka Cleves, Ohio-based Edgewater Sports Park, is more of the same. Thus, a feisty muscle car comes forth, and a Tesla Plaid shames it deeply. The result was understandable, as the Model S fought off a modern Chevy Camaro SS.

But then, from the 0:40 mark, this Street Car Takeover event just got F-body nasty, as a fourth-generation, dark and menacing Pontiac Firebird Trans Am came forth to challenge the EV king. And by the sound of those front-side exhausts, there was definitely something turbo going on under the hood.

Now, far from us to easily spoil the surprise, but we just cannot help it. So, ICE takes a rare win for the aftermarket team, as the sleeper Trans Am proved to be a 9.25s hoot that even the majestic 9.35s Plaid could do nothing to fend off! 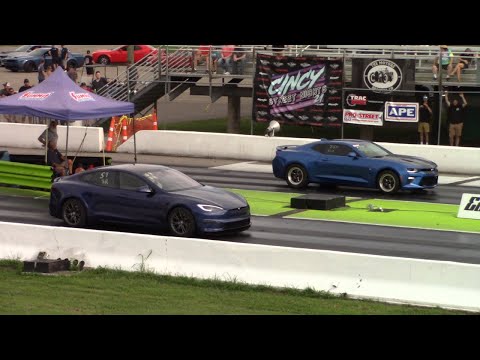