It was born before the muscle-car era began and was available as a coupe and a convertible.

It was a blue-collar hero of affordable speed within GM.

The space-age design era was already there, and the American car designers tried hard to put rocket-like taillights and big (bigger) fins at the back of the car. While doing this, the engineers tried harder to make the cars lighter, and, somehow, the Bonneville Coupe was the winner in its class. And it held its hero-car status until the mid-'60s.

Pontiac introduced the Bonneville as a sport-coupe vehicle in its lineup, and that's why the designers tried to make the car look sleeker than its predecessor. They imagined straight lines that stretched along with the bodywork and a tilted-forward design for the greenhouse. At the front, the double-rounded headlights were separated by a wide, pined-out, chromed grille. The sculptured side panels featured chromed slats emphasizing the sporty look of the car.

Inside, Pontiac made a long list of standard features and even a longer one for the options. It included a three-speed automatic gearbox, an air-conditioning system, and even bucket-seats instead of the front occupants' standard bench. A wood-trim on the dash and door-panels gave the idea of a luxury vehicle, while the leather-wrapped seats were available as an option.

Under the hood, Pontiac installed a 6.4-liter V8 available in two power options, depending on the carburetor system. The wide-track design gave the car an edge over its competitors in the handling department. Moreover, an LSD differential was available on the options list. 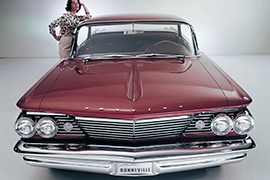