Built in Australia by Holden factory, the Pontiac G8 crossed the Oceans and landed in America, trying to revive the former glorious brand.

But then, the financial crisis struck, and the whole brand went extinct not before customers could enjoy this Australian/European/American muscle car-inspired four-door sedan. The car was built on top of an older platform used in Europe for Opel and Vauxhall, in Australia for the Holden Commodore, and in the U.S. for the G8. It was, actually, a brand-engineering product.

The car's exterior didn't look like an ordinary sedan fit for families, even though it was perfectly capable of doing that. Its front fascia sported an aggressive bumper with a wide air-dam at the bottom, split in half by a vertical slat in the middle. The upper grille was also designed in Pontiac-specific styling. Last but not least, to emphasize the car's performance-inspired character, the hood sported two louvers that made the vehicle looks even more aggressive.

Inside, Holden installed high-bolstered front bucket seats separated by a tall center console. Depending on the options, the G8 featured an infotainment unit with a touch-screen mounted on the center stack. Even the dashboard featured a similar design to the one from the Commodore, with a rounded visor above the instrument cluster, where the carmaker placed four dials and a center TFT display. At the back, there was room enough for two passengers.

Under the hood, GM dropped a 3.6-liter V6 which didn't match the car's aggressive look, but it also offered a 6.0-liter V8 that could smoke the tires. Later on, Pontiac introduced a more powerful version named GXP, which featured a Corvette engine. 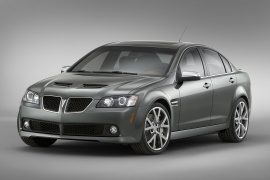