Unlike the 1964 model, when the GTO was an option package, in 1970, it was a specific model, and it showed it not only on the outside but also on the drag-strip where it was a fierce contender.

Designed to rule the muscle car arena, the GTO was still considered THE muscle car of all kinds. It offered enough to win almost any kind of drag race, but the rest was up to the driver.

The outside look of the car marked a return to the horizontally-mounted twin-headlamps, unlike the ’65 model, which featured the vertically-mounted ones. But perhaps the most important part of the 1970 model year was the body shape, which was much smoother than before. The design team dropped the angular lines and sharp angles for curves and soft edges. Its long hood hosted two vents, and the greenhouse featured a long, sloped rear window. All four side windows could roll down completely, creating a faux-cabriolet shape for the car.

Inside, the GTO offered a vinyl interior with bucket seats with wide headrests at the front and a bench in the rear. The floor-mounted gear stick for the manual transmission separated the front seats and was mounted on the tall center transmission tunnel.

Under the hood, Pontiac offered the GTO with two engine versions: a 6.5-liter V8 and a mighty 7.5-liter V8, both being paired to a standard three-speed manual. GM also provided an option for a close-ratio four-speed manual. As expected, a limited-slip differential was a standard feature for the GTO. 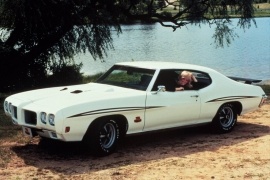