Now that Stellantis has officially signed the retirement bill (with 2023 being the final model year) for Dodge’s ICE-powered Challenger and Charger, we all need to cherish these rad combustion engine moments, irrespective of the victor!
30 photos

Sadly, but unsurprisingly, the era of the revived Challenger pony/muscle coupe and Charger super-sedan is swiftly ending. Well, as far as roaring V6 and V8s (with or without supercharging) are concerned, at least, because the nameplates will probably survive to become new-age zero-emissions heroes. But until the reinvention kicks in, let us cherish these cool ICE moments, which occured at Edgewater Motor Sports Park in Cleves, Ohio.

So, the videographer behind the Drag Racing and Car Stuff channel on YouTube continues his quarter-mile return after a quick summer break with feisty ICE supercharged action because aside from the Hellcats and Redeye, the focus is also on a thoroughly modified C6 Chevy Corvette! By the way, has anyone noticed how puny the supercharged sports car looks when placed right beside the humongous Chargers and Challenger?

Anyway, the first skirmish does not put everything into the proper perspective because the roaring and whining C6 and Charger SRT Hellcat are busy delivering a marvelous photo finish. So, round one narrowly goes to “America’s sports car” with a 10.03s ET against its Mopar opponent’s 10.04s result. No worries, there is a swift rematch at the one-minute mark where the feisty, dark, and menacing supercharged ‘Vette must contend with a flagship Mopar – the Charger SRT Hellcat Redeye.

That one proves its worth and dips to 9.94s while the GM adversary must contend with a close (but not close enough) 10.11s pass. In the end, the supercharged GM vs. Mopar battle is settled after a third skirmish against the all-mighty Challenger Hellcat (at the 1:36 mark). And, as it turns out, the “little guy” won the day in the end, again with a glorious 10.04s pass against the rival’s slower 10.82s result! 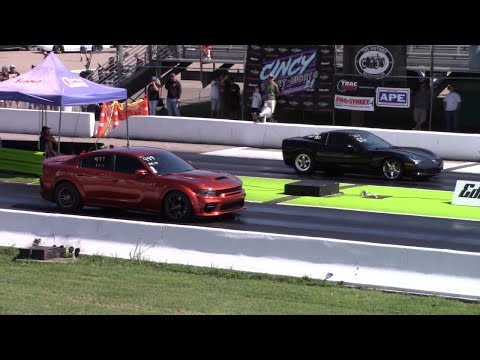