Only the name resembled the former glorious muscle car when Dodge introduced the 1981 Charger on the market.

Dodge introduced the 1982 Charger in the summer of '81, and it was the first with a front-engine and front-wheel-drive system. Unlike its predecessors, which offered big V-8s under the hood, this one was just a four-banger aiming at the European sport-compact coupes such as the Renault 17 or the Volkswagen Scirocco. But the big carmaker was in deep financial troubles, and it needed a car to sell in high volumes, and the former gas-guzzlers just couldn't do that, especially with another oil crisis in the public memory.

It looked was a hatchback designed on the newer standards with a wedged-shape bodywork. At the front, it featured rectangular headlights in individual clusters and a narrow grille between them, between the hood and the bumper. A wrapped-around plastic bumper that respected the 5-mph rule was added to the car, and its apron was aerodynamically studied to increase the downforce onto the front wheels. But building a hatchback was not one of the American's carmaker specialties, and that was obvious on the C-pillar, which was very thick.

Inside, Dodge installed bucket seats with high bolstered areas to keep their occupants in place. Unfortunately, the car's platform didn't do a job as well as the seats. The carmaker installed a folding rear bench in the back, thus increasing the otherwise limited trunk room.

Under the hood, the Charger started with a 2.2-liter engine which couldn't provide 100 hp. Its performances were barely in the same league with a Volkswagen Golf GTI. Its five-speed manual was geared for quick acceleration but with longer, higher gears for fuel-efficiency. Thus, the 1981 Charger proved to be a sporty-looking commuter vehicle, but not a sports car. 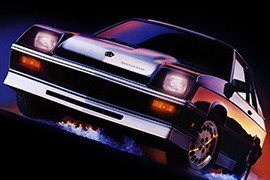