Watch Rivian R1T Drag Ford F-150 Lightning in a Tug of War, Has One Secret Working for It

Detractors like to ironically start with “German engineering at its finest” when talking about the Toyota GR Supra and its shared BMW Z4 DNA or the fact that it is built somewhere in Austria by Magna Steyr. But they may be entirely right and wrong at the same time.
26 photos

The gist of the feud has to do with the cult following achieved by the previous Supra Mk4 incarnation and the fact that Toyota had to cut some visible corners to make the partnership work. But the company also made sure that its free spirit would remain, as the GR Supra has already proven a capable platform for thorough aftermarket upgrades.

And there is no need to take our word for granted. The videographer behind the Drag Racing and Car Stuff channel on YouTube has returned after a quick break and gives us plenty of zMAX Dragway action involving a couple of feisty Toyota GR Supras that strive to achieve more than what their OEMs bargained for at the (four-lane) quarter-mile dragstrip.

The latest feature embedded below (uploaded on August 6th, 2022) comes from a Street Car Takeover event and is focused on a couple of (presumably) tuned Toyota GR Supras ducking it out like champs at Charlotte Motor Speedway’s zMAX Dragway – “the world’s first four-lane drag strip,” located in Concord, North Carolina.

One would not assume that a GR Supra facing off against a C7 Chevy Corvette would be the kind of drag race to just put things into the proper perspective but here it is reshuffling our expectations. So, the initial skirmish shows a black Toyota having the time of its life while teaching “America’s sports car” a quick Import vs. Domestic lesson of the 9.59s to 10.40s variety!

Then we switch to a harlequin GR Supra that likes to put even more of a quarter-mile show against a couple of Chevys. First, at the 1:21 mark, a C6 Corvette takes a major 8.9s to 9.25s beating. Then at the 2:04 mark, a vintage Coupe (is that a fourth-gen Chevy Malibu?) gets schooled back to 8.66s versus 10.9s nursery… 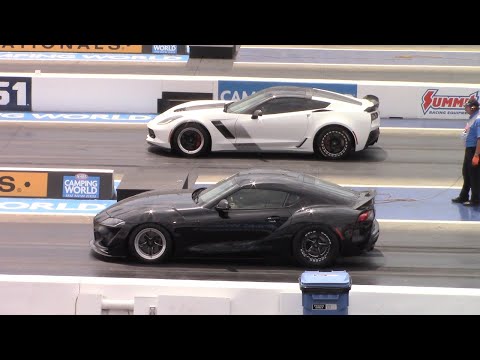