As it prepares to move towards full electrification to escape the fuel economy, emissions, and perhaps even some of the reliability issues, Stellantis is delivering a major blow to muscle car enthusiasts.
13 photos

According to a very recent CNBC report, Dodge will send its ICE-focused Challenger and Charger muscle cars to the gas-happy plains of car Valhalla at the end of 2023, ending the resurrected lines that have been a staple of a new generation of car enthusiasts during recent years. The discontinuation of the gas-powered Challenger and Charger muscle cars at the end of next year might soon mark the end of the ICE age for the brand, even though both nameplates are selling well even today.

That means we must treasure every moment we can find with Dodge’s muscle cars. So, cue to the videographer behind the “RPM Army” channel on YouTube, who presents us with a classic skirmish dressed up in modern attire - and it is an ICE swan song, sadly, involving the great Toyota Supra Mk4 underground racing hero and the flashy Dodge Charger muscle sedan.

It all happened during the Midnight Street Drags event that was held in the middle of June at the National Trail Raceway located between Hebron and Kirkersville, Ohio. But the summer vibes were present even then – so no wonder the feature was uploaded just recently, on August 15th. Anyway, the action is short and sweet, kicking off the proceeds with the traditional burnout presentation involving a burgundy Dodge Charger sedan and a menacing, black fourth-generation Toyota Supra.

Unfortunately, there is a singular POV focused on the Mopar, and there is also just one skirmish (a two out of three would have been way cooler), plus the digital scoreboard remained mum. No worries, though, it was still easy to ascertain a winner, as the Charger driver flew off the start line like a pro and gained an advantage he never relinquished until the end (as proven by the winner’s light)! 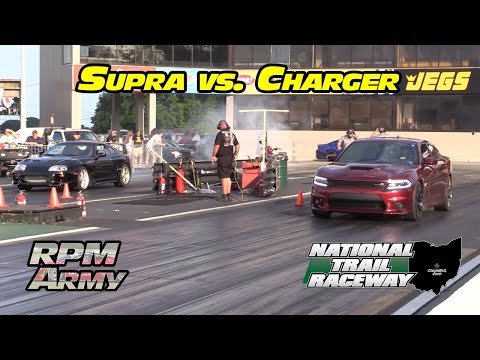