3 Ferrari SF90 Owner Upgrades His Car To Defeat the Tesla Model S Plaid, but It's Not Enough

Introduced for the 2021 model year with a 400-horsepower V6, the Ford F-150 Tremor is a rugged adventure truck with 500 pound-feet (678 Nm) of torque on deck. Fitted with 33-inch rubber of the all-terrain variety, this pickup competes directly with the meh Chevrolet Silverado ZR2.
17 photos

Why so harsh on the ZR2, you might be asking? Although it’s a true rival for the F-150 Tremor, everyone and their dog was expecting a Raptor-bashing truck from the biggest of the Big Three in Detroit. Unfortunately for prospective customers, General Motors couldn’t make a case for the supercharged V8 of the 2023 Cadillac Escalade-V. It’s all the more frustrating after the introduction of the Raptor R in response to the Ram 1500 TRX, but then again, GM has a history of disappointing customers.

The free-breathing V8 of the ZR2 is good for 420 horsepower and 460 pound-feet (624 Nm), which is absolutely fine if you can ignore The Ford Motor Company’s Raptor twins and the Hellcat-engined Ram 1500 TRX.

In a straight line, it’s obvious which of them has the upper hand from a dig and from a roll. If someone isn’t convinced by this prediction, let them know the ZR2 weighs 5,620 pounds (2,549 kilograms) versus the Tremor’s 5,350 pounds (2,427 kilograms). However, let’s mix things up a bit with a sport utility vehicle. Not a body-on-frame SUV like the Bronco, but a unibody.

Sam CarLegion decided to drag race both trucks against a 2022 Acura MDX Type S, which is the sportiest version of the mid-size crossover. Weighing in at 4,741 pounds (2,150 kilograms), this fellow is equipped with a single-turbo V6 that develops 355 horsepower and 354 pound-feet (480 Nm). 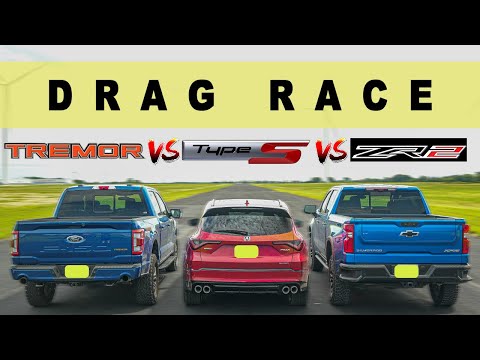