The Bonneville nameplate appeared on the Star Chief lineup as a trim level, but in 1958 Pontiac introduced it as a separate, personal luxury coupe model.

Born in the times of the Space Race between the U.S. and Soviet Union, Bonneville featured plenty of rocket-inspired elements. Pontiac also put more chrome on that car than other carmakers placed on their entire range. It was built to celebrate both the GM's 50th anniversary and the retirement of the designer Harley Earl from the company.

The striking '50s styling showed a dual headlamps system for the headlights. They were placed above the vast, side-to-side, chromed grille. At the lower side, a shiny bumper adorned with oval-shaped parking lights completed the imposing presence of Bonneville. On top of the front fenders, the carmaker placed rocket-inspired decorations and, from the sides, Pontiac used the same theme to enhance the car's profile. The long coupe sported a small ground clearance for its times. In the back, the double round red taillights resembled the same rocket-inspired theme for the coupe.

Pontiac installed a luxurious interior with silver sparkles embedded in the floor carpets. At the front, there was a wide bench where three people could sit comfortably, maybe just touching their elbows. In the back, the Bonneville featured another three-person bench, with a unique feature for the middle seat. When it was not used, the middle section could have been popped up and used as an armrest.

Under the hood, Pontiac installed a single V-8 engine but offered six power outputs ranging between 255 hp to 355 hp for the Tri-Power option (triple two-barrel carburetors). Most Bonnevilles came with a 4-speed Hydramatic automatic, though a small number had a 3-speed manual. 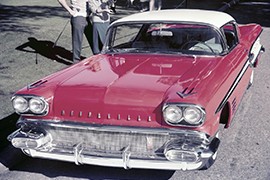