2 Expectation vs. Reality: Why the Mercedes EQS’s Exterior Design Is Disappointing

3 Hongqi L-Concept: Who Needs a Steering Wheel When You Have a Chandelier?

Elena Gorgan
When concept cars leave the virtual paper they’re drawn on and move on to occupy physical space, they carry with them someone’s dreams and hopes, a vision. Even if they only exist briefly, as one-offs, they represent someone’s attempt at pushing the boundaries in design or engineering.
14 photos

Most concept cars don’t make it into mass production, and that’s because it’s never the intent behind them. They are studies, exercises in design and/or engineering, serving the exclusive goal of showing what’s possible in either field. But they’re still awesome to look at and perhaps wonder how they would look in real life, on a real street, with real people behind the wheel.

Or, in the case of the Suzuki Misano, the motorcycle-inspired handlebar.

At the junction between cultures, lifestyles, and two- and four-wheelers is a concept car styled like an electric barchetta with a unique seating position, unique steering, and quite a unique driving experience. Meet the Suzuki Misano.

Suzuki Misano was designed and built as part of a Master thesis project by students at the Istituto Europeo di Design (IED), with help from Suzuki and partners Pirelli and OZ Racing. Suzuki was chosen because of its long tradition of making both cars and motorcycles. It’s part of Suzuki’s brief La Dolce Vita X Way of Life, and aims to deliver the best of both worlds: the automobile and the motorcycle. It is, if you will, a motorcycle that grew up to become a barchetta-style sports car.

You can see a video presentation of the prototype below. The concrete result of all than fancy talk is a very stylish roadster, with motorcycle-influenced elements, like tandem seating, the handlebar that replaces the usual steering wheel and the pedals, and an electric drivetrain. Driver and passenger are seated off-center, toward the left side.

Seating the two occupants in tandem instead of side by side also serves a practical reason: IED says that the vacant ride side can house the battery pack and room for cargo. No other details are included, so there’s no way of telling how much range the Misano would have. Or whether you could pack for a one-week vacation or would have to limit your cargo to a briefcase or backpack.

Stylistically, the Misano is a surprising blend of curves and more aggressive forms, a fact also underlined by the copper accents on the dark body and wheels. The name is borrowed from a racetrack in Italy, so this roadster is meant to look like it can go fast, even when it’s not moving. The headlights and taillights are arrow-shaped, but they also resemble the S of Suzuki.

Interestingly enough, the only door on the Misano features a panel of see-through glass (or something resembling glass), which allows the driver to see the road below. Since this is only a prototype and a concept, it’s an interesting addition that aims to enhance the driving experience. On a real-world car, inviting the driver to look at the road down below instead of ahead would probably not be very wise.

Measuring 4 meters (157.5 inches) in length and 1 meter (39.37 inches) in height, Misano is definitely a different type of roadster for the modern traveler. It’s electric, so its carbon footprint is smaller, and it’s cheaper to run and maintain; it’s also unique, presumably fast, and quite a looker. It would be the perfect companion for today’s eco-conscious driver.

“Misano is a thesis born out of the passion of young designers and developed as a project in a design center to offer the next generation a new lifestyle experience,” Suzuki Design Center Director Kimihiko Nakada says.

The prototype was manufactured by EDAG Italia, Torino Crea, Freeland.car, and Raitec and will go on display at the Museo Nazionale dell’Automobile di Torino, in Italy, from May 15 to June 6, 2021. Do give it a look if you’re in the area. 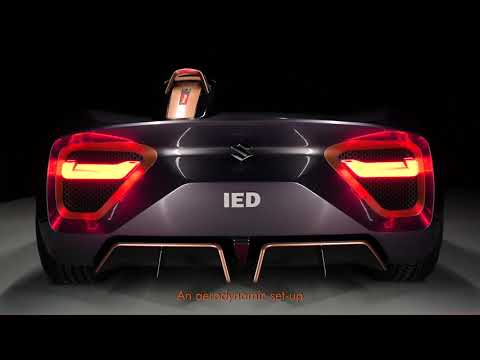