With the low sales of the SX4 S-Cross released in 2013, Suzuki decided to refresh the model to attract more buyers.

The new SX4 S-Cross was heavily redesigned and unveiled a completely new front end. The hood was raised and the nose became more upright, giving it a “stronger and bolder road presence” as Suzuki stated.

The rather anonymous grille we’ve seen on the previous model was replaced with a bigger chrome grille with vertical bars, the bumper was refreshed and the headlights suffered significant changes.

At the back, the SX4 S-Cross came with a redesigned bumper and slightly different taillights.

The major upgrade was meant to bring the SX4 S-Cross closer to an SUV’s design and capabilities.

The interior didn’t come with major updates, however, the quality of the materials was improved with softer plastics and optionally available brighter materials throughout. The cabin was still left with materials that were easy to scratch, but looked well finished.

The infotainment system available on the SX4 S-Cross was borrowed from the Vitara and it was bigger and more responsive.

The practicality offered by the SX4 S-Cross was hard to beat, as the space available was bigger than in the most crossovers. The crossover could easily accommodate up to 5 tall adults.

The trunk size was increased with the help of the reclining backrest and was up to 440 liters.

The ride was enhanced by the stiffer body and the tweaked suspension, and although a bit of body roll was noticeable at higher speeds, the SX4 S-Cross had a good grip and easy agile enough to offer a fun ride. 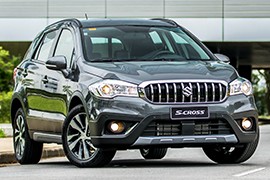