Toyota used to build cars with other car-makers.

It made the AE86 with Subaru, the Supra with BMW, and the Roomy with Daihatsu.

By 2021, Toyota expands its cooperation and shares the Rav4 Hybrid assembly line with the Suzuki Across. There were few differences between those two vehicles, both on the outside and on the interior.

The designers gave a new face for the Rav4 and made it look like a Suzuki. It wasn't just a badge replacement. The hood had to be the same as its Toyota brother, but the rest was changed. As a result, the slim LED headlights with their daytime running lights placed on the upper side inspired a pair of angry eyes. The bumper featured a big honeycomb A-shaped grille that was extended down to the lower side. On the bottom, a silver plastic shield was installed to remind customers that Suzuki once did very tough little off-road vehicles such as Samurai, Vitara, or Jimny. In the back, the Across featured the same taillights as its sibling, but the bumper was slightly different.

Inside, the steering wheel was typical for a Suzuki. On top of the center stack, Across offered a 9" touch-screen for the infotainment system. The cabin provided enough room for five adults and their luggage. Since the all-wheel-drive system was based on electric motors for the rear axle, the center tunnel was shorter, so a third person could stay in the middle on the bench.

Under the hood, there was the same Toyota hybrid system. There was a 2.5-liter Atkinson cycle engine mated to an e-CVT gearbox. While the hybrid system powered the front wheels, the rear axle was fitted with an electric motor. 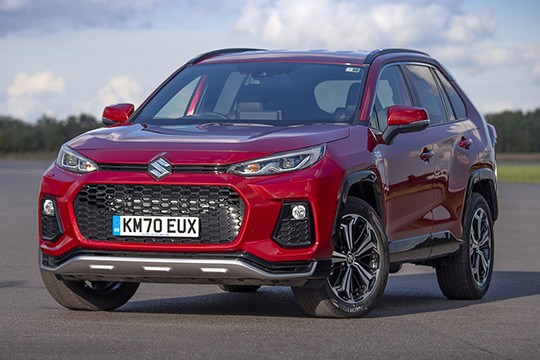