1 Volkswagen Sounds the Death Knell for the Up! GTI, Tiny Hot Hatch Is Dead for Good

4 Renault 5 Turbo Rendering Is Just the Right Amount of Modern, Begs to Be Driven

The 1980s gave us plenty of iconic cars, most of which came into being for motorsport homologation purposes. One of the most outrageous homologation specials of that exciting decade was the rally-bred Renault 5 Turbo (or R5 Turbo), the world’s first road-legal, mid-engine hatchback.

Renault 5 Turbo: The Story of a Mid-Engine Hot Hatch Legend

With the exception of its presence in Formula 1, the name Renault might not ring many familiar bells to our American readers. Founded way back in 1899, the French manufacturer started selling cars in the U.S. during the latter half of the 1940s and had a pretty decent presence on the American continent until the late 1980s.

Ironically, the model which kickstarted Renault’s downfall in North America was the one used as the base for the fascinating Turbo. Named Le Car (or Renault 5 in Europe), it was a small hatchback that had nothing sporty or high-performance about it. However, its simplicity, practicality, and small price made it extremely popular on the old continent.

Things were different in the U.S., where the model failed to become a best-seller, which ultimately led Renault to withdraw from the market.
From a boring people mover to one of the very first hot hatches
The Renault 5 hit European streets in 1972, and two years later it made it across the Atlantic. As I mentioned, earlier, there was nothing exciting about it and few could have envisioned what Renault had in store for this tiny car.

The first sign that something special was brewing came in 1976, when the sportier 5 Alpine (or 5 Gordini, in the UK) was launched in Europe. One of the very first genuine hot hatches, it was a challenger to the upcoming Golf GTI.

Compared to the base model, the exterior design was just slightly bolstered with add-ons such as fog lights, alloy wheels, or a small rear spoiler. However, the key difference was found under the hood.

The Alpine came with a 1.4-liter OHV (overhead valve) four-cylinder that featured a crossflow cylinder head with hemispherical combustion chambers and could produce 92 hp – nearly twice as much as the standard model’s 1.4.
Evolving into a legendary homologation special
During the 1970s, the French manufacturer was trying to make a name for itself in motorsport, and rallying was one of the key disciplines where it wanted to thrive.

With Lancia dominating the World Rally Championship (WRC) from 1974 to 1976 with its mid-engine Stratos HF and its Renault Alpine A310 failing to repeat the success of the A110 1800 (which helped the French win their only WRC championship in 1974), Renault devised a secret plan to build a mid-engine version of the 5 Alpine.

Codenamed Projet 822 (Project 822), the ambitious endeavor began in 1977. While a stock 5 Alpine was sent to Italy, where Bertone designers Marc Deschamps and Marcello Gandini (the man behind the Lancia Stratos or Lamborghini Countach) were tasked to revamp the body, back home, four of the company’s top engineers began developing a special version of the Cléon-Fonte (aka Sierra) 1.4-liter engine.

Fitted with a Bosch K-Jetronic fuel injection and a Garrett T3 turbocharger, the once-uninspiring powerplant was suddenly capable of close to 200 hp in race spec, a figure that almost doubled in the next decade of motorsport development.
Shocking the automotive world with the first-ever mid-engine hot hatch
It took another three years to finish the car, and in January 1980, at the Brussels Motor Show, Renault shocked everyone with its profoundly modified version of the 5 that was fully road-legal and soon to be available in dealerships.

While it still resembled the standard model, the work done by Bertone made it undoubtedly more aggressive. The most obvious upgrade was visible at the rear, where the wheel arches were generously enlarged and equipped with big vents.

That being said, the shocking part about this beefed-up 5 was not its bodywork, but what sat underneath it. When lifting the hood, people were baffled by the absence of an engine that now stood behind the front seats. Delivering 158 hp at 6,000 rpm and 163 lb-ft (221 Nm) of torque at 3,250 rpm in street-legal guise, the turbocharged 1.4-liter made the 5 Turbo the most powerful French car in production and the first mid-engine hot hatch ever built. In addition, the car was now rear-wheel drive, and with a curb weight of only 2,138 lbs (970 kg), it was one of the most exciting cars that one could buy at the time.
Both a success and a failure
The R5 Turbo was manufactured from 1980 to 1986. Renault’s original plan was to only build the 400 units required to gain homologation, but the overwhelmingly positive reception it received in Brussels encouraged the company to up the ante. The new sales plan envisioned around 3,000 U.S.-bound units, but sadly, the car never officially made it to the States. However, back home in Europe it enjoyed strong sales that totaled 4,987 units.

According to official figures, 1,820 of them were mere original-spec Turbos, while the other 3,167 were the revised Turbo 2, which featured a less sporty interior, minor styling changes, and were cheaper than the initial version without sacrificing performance. This made the homologation special a marketing success for Renault, yet the same can’t be said about the motorsport versions.

The Turbo made its WRC debut during the 1981 season. Its first outing was the famed Monte Carlo Rally where it was driven to victory by Frenchman Jean Ragnotti. Unfortunately, the season was a disaster, and Renault finished 7th in the manufacturers’ standings.

With the emergence of 4WD machines that proved faster on dirt courses, things didn’t improve in the years that followed, even if engineers enlarged the engine and enabled it to spit out 345 hp. The car would manage to finish first in only three more races in the next five seasons. A 380-hp touring car version called 5 Maxi Turbo Superproduction won the French Supertouring Championship in 1987, but this triumph was bittersweet, as the initial plan to win the WRC was never achieved.
A legend lives on
Despite that, privateers continued to compete in rally versions of the Turbo in regional championships and local races, where it proved extremely successful.

As for the road-going version, it solidified its place among hot hatch legends in the decades that followed and is still revered by enthusiasts to this day.

According to Hagerty, an example in good shape can be worth around the $100,000 mark, while a low-mileage, Concours condition can easily exceed $200,000.

You can watch the legend in action and learn more about its fascinating history in the Petrolicious video below. 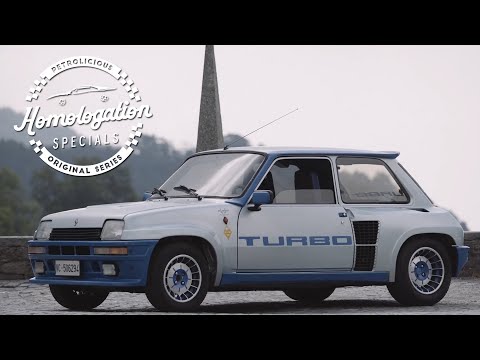