It looks more like a movie prop from the set of Star Wars, but the Modulo was a real concept car way ahead of its time. More than fifty years have passed since its release, but it continues to be the wildest vehicle in the history of Ferrari.

The long-lasting relationship between the famed Maranello-based carmaker and the Pininfarina design studio has given birth to some iconic sports cars, including the 250 GTE 2+2 or the Testarossa.

For the 1970 Geneva Motor Show, the two companies planned to go beyond the limits of conventional design and create something completely different.

The man in charge of this project was Paolo Martin, who was also responsible for beauties such as the Rolls-Royce Camargue, Triumph Spitfire, or the Lancia Beta Montecarlo. However, the Modulo was nothing like anything he had previously drawn up, and many jokingly assume that he drew inspiration from the Jetsons cartoon series. Legend has it that he conceived a similar series of sketches years before, but management considered the design way too futuristic. Luckily, they had a change of heart and eventually decided to turn it into reality.

The show car had an extremely low-slung wedge body with partly covered wheels. There were no conventional doors and instead it featured an innovative canopy-style glass roof that slid forward to allow occupants to get in and out.

Inside, Alcantara adorned most of the cabin, with the notable exception of the futuristic seats that were upholstered in red leather. Built as a right-hand-drive vehicle, it had a very peculiar retractable steering wheel that was connected to the steering rack via four inward-running spokes.

Underneath the futuristic bodywork was one of 25 race cars originally created for the FIA World Sportscar Championship. For the 1968 season, this particular 512 S chassis was upgraded to 612 Can-Am specifications, but since the carmaker was unable to sell the machine to privateer teams afterward, it was deemed surplus, stripped down, and sent to Pininfarina to serve as the base for the wild show car.

Ferrari originally fitted the race-spec 5.0-liter V12 that produced 550 hp under the Modulo’s hole-ridden engine cover. According to the manufacturer, the powerplant enabled the car to accelerate from 0 to 60 mph (97 kph) in 3 seconds and reach a top speed of 220 mph (354 kph). However, the engine and five-speed manual gearbox were removed after initial testing in order to allow the team at Pininfarina to apply the finishing touches, but due to several delays, the show car made it to Geneva without a powertrain.

Nevertheless, when it was finally revealed, those in attendance were dazzled by its audacity. Originally painted black, it was by far the most spectacular presence at the event. It was well-received by critics and in the following years, it won 22 international awards for its breathtaking design.

After the show, it got its engine and transmission, was repainted white and ended up in Pininfarina’s possession until 2014 when it was sold to American film producer, automotive entrepreneur, and die-hard Ferrari enthusiast James Glickenhaus. He embarked on an arduous restoration process which included a full powertrain rebuilt, and after five years of work, it was showcased at the 2018 Concorso d’Eleganza at Villa d’Este in fully functioning form. You can hear its twelve-cylinder roar in the YouTube video below, courtesy of 19Bozzy92.

Even if it never made it into production, the 512S Modulo influenced a whole generation of wedge shape-designed supercars like the Lamborghini Countach or Ferrari Testarossa. It also inspired other futuristic Pininfarina concepts, such as the Lancia Stratos Zero, which debuted a few months later at the Turin Motor Show, and the 2005 Maserati Birdcage 75th. 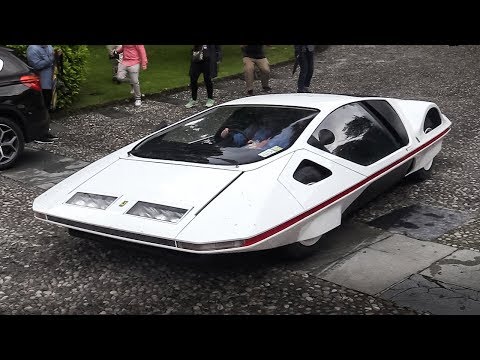