After 75 years on the market, the famous Italian brand Ferrari introduced its first official production vehicle with four doors and four seats and named it Purosangue (thoroughbred).

Just like Porsche, who had to create the Cayenne to survive, the Italian supercar-maker Ferrari understood that the era of niche vehicles was gone. There were not enough buyers for its products, so it had to find new territories. It found it in the crossover segment with a vehicle named by the Italian carmaker as more of an evolved GT, not an SUV.

The car's shape is absolutely a Ferrari one. Its long hood, raked windshield, and sloped roofline resembled the same idea seen on the Ferrari FF. In addition, the enlarged, muscular quarter panels evoked many supercars that came from Maranello. At the back, the quad-exhaust and the half-circular taillights were already a common sight on several vehicles produced by the Italian manufacturer.

Inside, Ferrari created a four-seat cabin with high-bolstered front and rear seats. Moreover, the center console was extended to clearly separate the front occupants. In addition, a similarly-shaped console was placed between the rear occupants. For the dashboard, Ferrari made an instrument cluster for the driver and an additional touch-screen for the front side passenger.

Under the hood, the carmaker installed a front mid-mounted V12 engine behind the front axle. It was naturally aspirated and featured a direct fuel-injected system that helped the carmaker provide enough oomph for its customers. The powerplant was paired as standard to a seven-speed, dual-clutch, automatic gearbox that transferred the torque in all corners. 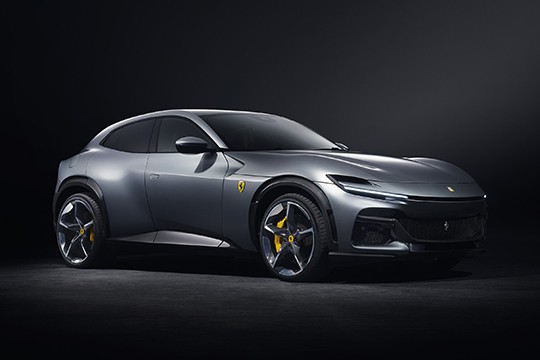 4 Ferrari Roma Virtually Grows Into a Stylish Sedan, Should Porsche Be Scared?

5 All-Black Ferrari 550 Maranello Is Both Practical and Beautiful, Needs a New Owner