The smallest front-engine Ferrari is also the least expensive four-wheeled product from Maranello, from some points of view being essentially a non-direct descendant of the Ferrari Dino or at least part of the same lineage.

Unlike the Dino, the Roma uses a front-midship design for its engine, likely to be as close as possible to Enzo's ethos of how a perfect sports car should be like. From this perspective, the all-new model is a more direct descendant of the Ferrari front-engine Gran Turismo lineage, which began with iconic cars like the 250 GT Berlinetta Lusso or the 250 GT 2+2.

That said, the Ferrari Roma is a so called 2+ coupe, with the two front seats being accompanied by two very small jump seats in the rear, which can be used by children or smaller-sized people for short periods of time. Since this is a Ferrari we're talking about, Maranello has saw fit to make it the most powerful model in its segment. Its twin-turbocharged, 3.9-liter V8 has an output of no less than 620 horsepower at 7,500 rpm and is a member of the same V8 family that was won the International Engine of the Year for four years in a row in its various iterations. Paired with an all-new 8-speed dual-clutch gearbox, the engine sends all of its power to the rear wheels. 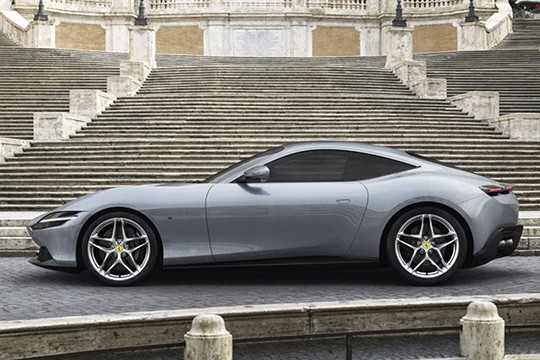