Open-top vehicles were always part of the Ferrari's lineup, and, in 2022, the Italian carmaker introduced a new model, the 296 GTS.

Based on the 2021 296 GTB, the Spyder continued the idea of placing retractable hardtops instead of the ragtops used on older Ferrari convertibles. That not only added more practicality for the users but also allowed the carmaker to create a shape that also provided more comfort and safety than a regular ragtop vehicle.

The shape was already known from the coupe, or berlinetta, as the carmaker insisted on calling it. At the front, the supercar sported a broad grille extended from one side to the other of the apron, with a narrower gap in the middle section. This was used for cooling the electrical system since the 296 architecture was a plug-in hybrid one. Its sides revealed deeply sculptured doors on their mid-upper section, making room for the air-intake placed above the rear wheels, one on each side of the vehicle. Those were used for both cooling and feeding the engine. The hardtop was pivoting on rear-mounted hinges and hid under a hard cover above the engine compartment. It only needed 14 seconds for this operation, at speeds up to 45 kph (72 kph), meaning that it could have been operated anytime while driving within city speed limits.

Like its coupe sibling, the 296 GTS featured two sport bucket seats with high bolstered areas that helped during high-speed cornering. The dashboard design, with its fighter-jet-inspired design, sported an instrument cluster. On the center console, Ferrari showed a modern interpretation of the classic gear-shift gate and a storage compartment for the car's key.

Since it was a plug-in hybrid, the car combined the power of a twin-turbo V6 with an electric motor for a total output of 830 hp. It was mated to an eight-speed automatic transmission that sent the power to the rear wheels. The system offered the driver to use the 296 GTS in a full-electric mode for a maximum of 25 kilometers (15.5 miles), which was enough for a daily commute by European standards. 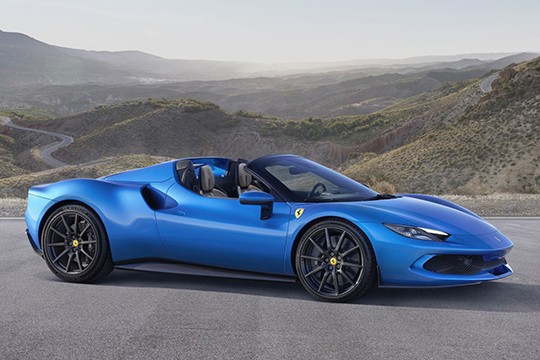