Developed as an homage to the V8 engines, Ferrari F8 Tributo has the most powerful V8 engine ever mounted in a Ferrari, apart from those of special series.

The Italian manufacturer squeezed 185 HP/l. The total output power is 720 HP without any turbo lag and the sounds, well, it is a true Ferrari sound. This engine received multiple awards in 2016, 2017 and 2018 and received the prestigious title of “Best Engine” of the last 20 years.

The Ferrari F8 Tributo was designed by Ferrari Style Center and its look integrates the expertise in the GT and Challenge championships. The air ducts and fins were developed starting from the 488 GTB model, but the upgrades to the turbo and intake manifold brought 50 more HP for the F8 Tributo.

Interior is a typical Ferrari mid-engine type, with a dashboard oriented towards the driver. The controls and steering wheel mounted controls are specially designed for the F8 Tributo and all of them are giving a luxurious, yet sporty look.

Since we are talking about Ferrari, the performance is on top of the carmaker's priorities. First of all, Maranello's engineers ensured an optimum weight distribution for a mid-engine car, with 41.5%-58.5% proportions. The 0-62 MPH (0-100 km/h) sprint is achieved in 2.9 seconds with a top speed electronically limited to 211 MPH (340 km/h). 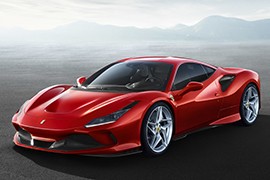