2 2023 Acura Integra Enters Production in Ohio, Dealers Will Get the First Cars in June

5 A Deep Dive Into the Awesome Tech of the New 2023 Acura Integra
Car video reviews:
Up Next

It has become rather normal for certain automakers to make their cars a bit punchier than advertised. We’ve seen it happen to many models, with the McLaren 720S arguably being one of the most famous examples.
7 photos

This move, however, is not limited to vehicles that cost six or seven figures. As a matter of fact, it happens in the five-figure category, too; just ask Acura about it, while mentioning the new generation Integra.

According to the official spec sheet, the 2023 Integra has 200 horsepower and 192 pound-feet (260 Nm) of torque available via the right pedal. Sporting different tuning to set it apart from the latest Honda Civic Si, Acura claims, the turbocharged 1.5-liter four-cylinder engine is mated to either a six-speed manual transmission or a CVT, delivering the thrust to the front wheels solely.

So, how much does the power unit put out in the real world? That’s for you to find out by scrolling down and hitting the play button on the video signed by AHC Garage on YouTube, with the guys behind it strapping an A-Spec car to the dyno to reveal the actual numbers. Mind you, don’t expect anything on the extreme side, as this is still a small four-banger that we’re talking about.

Before watching the video, we will remind you that the new Integra is accompanied by an MSRP of $30,800 in the United States. The most affordable A-Spec is $2,000 pricier, and for the A-Spec with Technology Package, you’re looking at a minimum of $35,800 regardless of the chosen gearbox. A special lease program detailed on the brand’s official website reveals that one can get it from $399 per month, for 36 months, with a $2,999 down payment with no security deposit. These sums exclude tax, title, license, and documentary service fees. 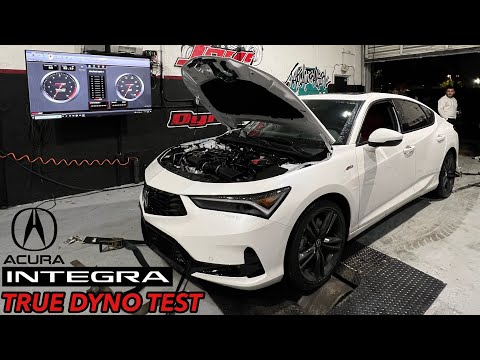