Acura decided to revive one of the most famous nameplates from its inventory, the Integra, but it did it in a surprising way, on a four-door sedan.

While for some, the former Integras came only in a two-door shape, it actually existed with four-door versions. But, of course, the Integra TypeR was the one that increased the fame of this nameplate.

Introduced as a 2023 model year, the Acura Integra nameplate was, more or less, a four-door coupe based on the same platform as the Civic. Its narrow LED headlights sported a signature DRL inside them. From its sides, the racked windshield and the curved roofline that descended in a slope towards the trunk lid formed a coupe shape. Behind the rear doors, the carmaker added a small triangular window, so it could increase the driver's rear three-quarter visibility.

Inside, Acura placed its bets on a mix of luxury feeling and sporty design. Even though the floating-design trend for the infotainment screen was almost gone, the carmaker didn't care and put one atop the center stack. It offered it as standard with a 7" size, while a 9" unit was on the option. The rest of the dashboard featured clean lines and, in front of the driver, a 12" TFT display for the instrument panel. At the front, the two bucket seats with high bolstering provided adequate support needed while hard cornering. Between them, a tall center console sported the gear selector and the armrest. For an increased sporty feeling, the carmaker added aluminum pedals.

Under the hood, Honda dropped the 1.5-liter turbocharged engine pumped-up to 200 hp. It paired it to a six-speed manual or, as an option, a CVT. As usual, the power went to the front wheels. 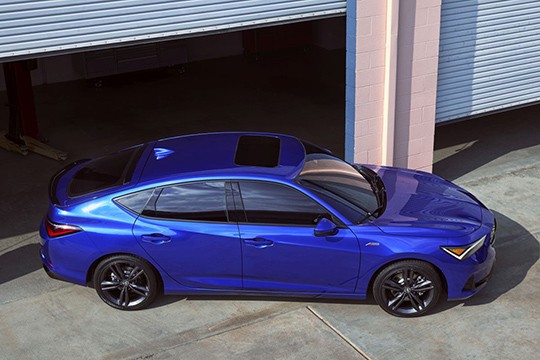