Acura unveiled the 2011 TSX Sport Wagon at the 2010 New York Auto Show, and besides being a re-badged European Honda Accord Tourer, it featured a few important differences.

With a more and more aggressive styling, the TSX aimed directly at mid-size premium vehicles. The sedan version was already on the market since 2008, but without a station-wagon shape to cover a young family's needs, it was difficult for Acura to increase its sales. The design-team from the badge-engineering department didn't tear a sweat when they made it.

At the front, the TSX Sport Wagon sported the specific Acura grille with a fat chromed slat at the top, under the hood's edge. At the bottom, the side scoops were adorned with silver covers around the fog lights. At the rear, the station wagon received a new set of revised taillights and a rear license plate garnish that added more visual appeal for the TSX.

Like the rest of the TSX range, the 2011 models received more visual upgrades. It sported a refreshed design for the centers stack with darker trims, silver door handles, and a new steering wheel. For the rear seats, Acura installed a set of vents for heating and cooling. In its station wagon shape, the TSX offered 472 liters (16.7 cu-ft) of space with seats up and up to 1.713 liters (60.5 cu-ft) with the rear bench folded.

Unlike its European sibling, Honda offered the 2011 Acura TSX Sport Wagon with a choice of two engines: the 2.4-liter inline-four and a 3.5-liter V-6. While the former was available with a six-speed manual and a five-speed automatic as an option, the latter featured a standard five-speed automatic. 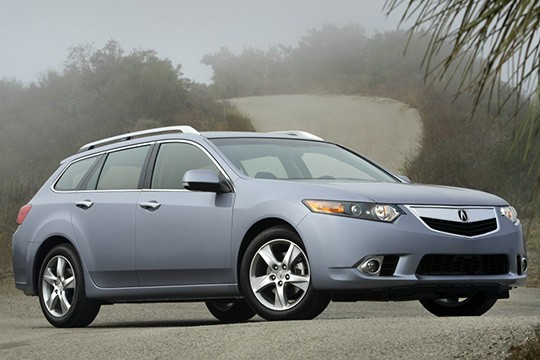