Acura unveiled the 2019 MDX model in late 2018 at the Los Angeles Auto Show and introduced a new A-Spec version for those who expected more from the Premium Japanese SUV.

By 2018, the third generation of the MDX was already four years old, and it needed an upgrade. So the Japanese carmaker paid attention to its customers who asked for something new and introduced an A-Spec model, in line with the TSX A-Spec.

The car’s exterior received an upgrade for the headlights, which looked sharper with their five LED lamps on each headlight. Their L-shaped turn-signals and the 3D mesh-grille design were far from the knight-visor from its predecessor, and that was a good thing. On the lower side of the bumper, the carmaker added a broad black grille that covered the apron and included the fake side-scoops that hosted the fog lights.

Inside, the carmaker used the same combo of analog dials and TFT displays for the instrument cluster, similar to the one used in the TSX sedan. On the upper side, a small screen showed the status of the SH-AWD system. The A-Spec version featured black or red leather upholstery adorned by black Alcantara inserts on the sport seats.

Under the hood, Acura relied on the same 3.5-liter V6 that proved to be worthy in many Acura and Honda models. It was paired as standard to a nine-speed automatic gearbox, which sent the power in all corners. 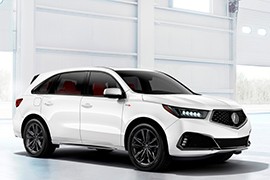