1 The Strange Case of the Move of World’s Largest Megayacht, the $600 Million Dilbar

5 $600 Million Megayacht Scheherazade Was a Christmas Gift From Putin's Friends
Car video reviews:
Up Next

There is no rule saying that the bigger the secret, the harder it is to keep, and the latest launch from prestigious shipyard Lurssen proves it. Opera, the biggest launch from Lurssen this year and the 10th largest vessel in the world, is a $450 million secret.

Last seen in May this year, when the bare hull was towed to the largest floating dock in the world, which Lurssen owns and which currently holds the seized Dilbar, Opera was officially launched earlier this month. It is expected to be delivered to the owner in the first months of 2023 and, when this happens, it will formally become the 10th largest superyacht in the world and one of the just 61 megayachts in this size category.

Make no mistake about it, Opera is gigantic. At 146 meters (479 feet) in total length and seven decks, it is believed to deliver an interior volume of over 10,000 GT. That last detail is not confirmed: as with many other custom megayachts and superyachts, Lurssen is keeping a very tight lid on the specifics until the eleventh hour, and Opera is no exception.

But you don’t need exact gross tonnage to appreciate the megayacht’s size: the videos below will do just fine. All three were taken on the day of the launch, with the official Lurssen one, featuring opera singer Elizabeth Winn, offering a slightly better look at the exterior.

In reality, not much is known about Opera from the official channels, though a lot is being said about it. This megayacht is, if you will, the industry’s best-kept secret.

Rumor has it that it comes with a price tag of at least $450 million, which will also place it among the world’s most expensive ships, and that the owner is billionaire Sheikh Abdullah bin Zayed al Nahyan, who is the Minister of Foreign Affairs and International Cooperation of the United Arab Emirates. He is also the half-brother of Khalifa bin Zayed Al Nahyan, the former owner of Azzam, the $600 million megayacht that remains the world’s longest and most mysterious – and the most outrageous, according to urban legend.

Opera is built on Lurssen naval architecture, with a teak deck, a steel hull, and an aluminum superstructure. There are notable similarities between the exterior of Opera and another recent Lurssen launch, Blue, which was penned by Terence Disdale Design. Some trade publications note that the exterior and interiors of Opera are both by Terence Disdale, which is highly probable but unconfirmed by Lurssen as of the time of press.

Formerly called Project Opera, Opera is believed to be based on Project Sassi, a 145-meter (476-foot) megayacht that was damaged in a fire at the Bremen shipyard in 2018, inside the same floating dock. Reports claim that Lurssen may have actually used the original hull for the new build, but again, they’re not confirmed.

While specifics are pending, photos and videos available online show a graceful silhouette with elegant lines, floor-to-ceiling windows, and plenty of outdoor space for lounging and entertaining. They also show two helipads, one on the foredeck and one on the upper deck aft, a swimming pool on the main deck, a jacuzzi, an observation deck, and an expansive beach club aft. If ownership reports are accurate, Opera will never be offered for charter, but it will definitely be the perfect vessel for a (large) family getaway.

Speaking of which, reports claim that accommodation onboard is for up to 40 guests and as many as 80 crew, which would put Opera in the region of a small cruise liner and on par with Azzam.

Scheduled for a 2023 delivery, Opera is just one of the many megayachts currently in the works at Lurssen. It will be followed by Luminance, which is shorter by just 1 meter (3.2 feet), and whose progress was temporarily halted this year when its Azovstal steel plant billionaire owner considered selling it unfinished because of the Russian-Ukrainian war. 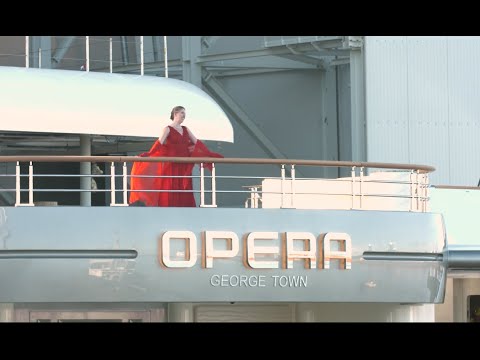 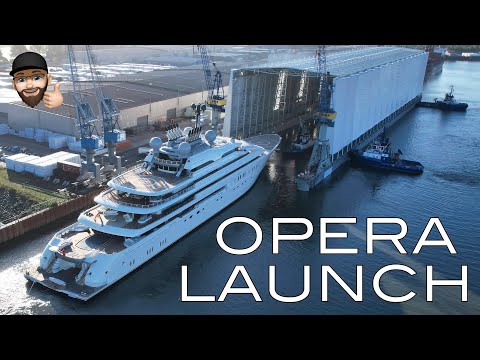 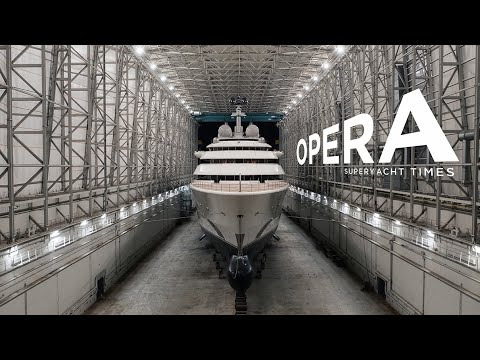